Many Teens Are Not Getting Enough Sleep. Their Internal Clocks Do Not Run the Same as Adults or Children. This Can Cause Problems For Teens and Leave Parents Struggling to Find Ways to Help.

Parents of teenagers can tell you what kind of sleep schedules they have. Often the child stays up late and then is difficult to awaken the next morning. On the weekend many will stay up late and sleep until noon if given the chance. This sleep cycle can be unhealthy if the child is not getting enough sleep. This sleep deficiency can cause problems for the child physically, socially, mentally, and academically.

Teenagers need between 8.5 and 10 hours of sleep. As children age, their sleep patterns shift to later times. Unfortunately, society does not shift schedules to later times so teenagers must adjust. Only about 15 percent of teenagers are getting 8.5 hours of sleep (National Sleep Foundation, 2011) and 10 percent of children are falling asleep in school (Michigan, 2010). Irregular sleep patterns disturb the internal clock which affects the amount and quality of sleep.

The consequences of sleep deprivation can be serious. It can have a physical, emotional and mental effect on them. Some physical effects can include dark circles under their eyes, skin that lacks color, appearance that is older than their actual age, a look that is not as vibrant. Also their glucose metabolism is altered or less effective which can lead to Diabetes. It affects their food consumption leading to unhealthy eating and increased caffeine usage. Foods high in sugar, caffeinated beverages, and energy drinks are commonly used to combat fatigue but negatively affect your teens' health. The body reacts to a lack of sleep the same way it reacts to an infection because it is not getting the restoration that it needs to stay healthy.

Sleep loss can have an emotional impact on teens as well. It can manifest itself in mood swings and aggressive behavior. Mentally, teens will experience difficulty concentrating, difficulty focusing, and difficulty with problem solving. A brain that is deprived of sleep will eventually force you to fall asleep. This may result in falling asleep in school or behind the wheel. Falling asleep at the wheel is responsible for 100,000 crashes every year. In extreme cases, people have been known to hallucinate due to lack of sleep. (National Sleep Foundation, 2011)

As parents, how can we help our child recover from the deficit? The National Sleep Foundation suggests:

People can have short periods of insomnia. When they have it for long periods of time, it becomes a problem. If he is getting enough sleep but still feeling very tired, then he should be evaluated to look for other causes of the fatigue. 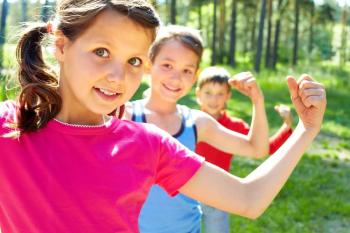 How Much Exercise Does Your Child Need?