One Concept and Two Words Saved These Children From a Stranger's Dark Intentions.

The fear of child abduction always haunts us as parents. Abduction rates are high all over the world, and our children are the most precious treasures we have. We must take care of them where ever we are.

This year I started talking with my four-year-old daughter about safety. For example, I tell her that she doesn't need to kiss anyone if she doesn't want to, that she shouldn't accept anything from strangers if her mommy and daddy aren't with her, and she absolutely should not let anyone touch her.

When you read this story, you'll feel joy and sympathy for her children.

Jodie Norton is a mommy blogger who writes about her experiences in her blog called "Time Well Spent." In one of her posts, she writes about what happened to her children and how they managed to save themselves from a possible abduction by strangers using a few words their mom taught them.

Norton says in her blog that one morning she felt a deep and stabbing pain in her ovaries and had to rush to the doctor. As a mother of four children, she had to drive with them in the back seat, all while in tremendous pain.

When she got to the hospital, she left her two older children on the hospital sidewalk knowing that in about five minutes, a friend of hers would pick them up and take them to school. Norton hurried into the emergency room with her two younger children, thinking her older two would be fine while they waited for their ride.

Norton found out that her friend was about 40 minutes late, and in that time three people approached her two children and asked to be accompanied inside the hospital.

They asked the boys to help them look for a man who was in the bathroom and didn't want the doctors to take care of him. The strangers told the boys they needed their help to persuade the man to let the doctors help him.

The children simply said "no thanks," no matter how many times the three people persisted. They later told their mother about their experience and even said that later they saw another man leave the hospital and get in the car with the other three people. They firmly said "no thanks," so the strangers had no choice but to give up.

A family rule that saved them

In addition to their refusal, the boys had learned a family rule that saved them from possible abduction. The boy told his mother after describing the incident, "Mama, I knew they were tricky people because they asked us for help. Adults don't ask for help from children." With this concept of "tricky people," the child knew the people speaking to him were dangerous.

Why not "stranger danger?"

Norton said the "tricky people" concept saved her children. Using the term "stranger danger" confuses children into thinking these people are aggressive, violent or frightening. And many times, people who approach children with kidnapping intentions appear friendly and try to build rapport with the child. If the child sympathizes with that person, they probably won't agree with the "stranger" preconception.

Using the "tricky people" concept will let the kids know that the person will want something more from them; that is precisely what parents should emphasize.

The "tricky person" concept came from Patty Fitzgerald, who shares it in her program "Safely Ever After." She advises parents to stop telling their children not to talk to strangers, because they'll have to do that eventually - so teach them what kind of strangers they are safe with.

One of the things this program encourages parents to teach children is that only "tricky people" ask for help from children. If a safe adult needs help, they will ask another adult - not a child.

As our children grow up, it's important that they learn to take care of themselves and stay safe in any emergency that might arise.

Let's hope we never have to face such a situation, but we need to teach our children of these potential dangers. Teach your children your home address, your phone number and teach them that their bodies are private, so they can say "no" if they're uncomfortable. It will protect them from potential dangers and increase their self-confidence.

This mother's trick fascinates me, and I want to start putting it into practice when I have safety talks with my daughter. How do you teach your children to be safe? 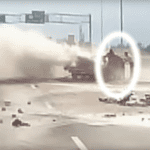 Man Witnessed a Horrific Crash; Then His Dash…