Things not to lie about to your children

Children are not only very wise, they are very imaginative. Being honest about things that affect them is really important. Lying may seem like the way, but in the end, it may harm your relationship.

Children are smart. They are also imaginative. They tend to fill in the blanks when the obvious truth is withheld from them, and they generally imagine the worst.

While we don't necessarily need to fill them in on gritty details, telling them the truth is almost always a better option.

Here are some common lies that parents tell they might want to reconsider:

When you and your spouse are having an obvious fight, don't tell the kids you're just having a discussion. They're not going to believe it, and they will likely imagine something far worse. Explain that just as they fight with and still love their sibling(s) or a friend, you still love their other parent, but need to sort things out and sometimes that gets loud and angry. Assure them it will eventually be resolved, apologize for the scare, and do your best to keep it down.

When you don't talk to one another

Again, the children will imagine the worst-separation or divorce. If that is a possibility, let them know you are just going through a hard time right now. If it is a certainty, tell them. They will need time to process the whole situation. Reassure them it does not have anything to do with them. Don't share the details, and play them as a pawn. Keep everything as normal as possible with schedules and rituals. Answer questions as asked based on age and maturity.

When money is tight

Avoid terms like, "We're broke." or "We're poor." They may go to bed imagining that they will go hungry or get taken away. On the contrary, don't state "Everything is fine." If everything is really fine, they will expect the things they are used to. Tell them the truth, which is probably that the situation is temporary, and there are things you have to cut back on for a little while. Then provide all the cheap fun you can to keep spirits up. When things get better, plan a special announcement and celebration.

When someone is terminally ill

Preparing children for the death of a loved one is the kindest way to handle it. Start in advance, easing them into it. Be gentle, forthcoming with answers and be prepared. This will take some emotional juggling since you will probably be stressed yourself. Keep them updated. A good object lesson for this is showing them a glove. The glove is the body and the hand is the spirit. When death occurs, the spirit leaves the body and goes to heaven. Handle this according to age and maturity.

When there are legal problems

Sometimes a parent may have legal issues. They might even involve probation or jail time. Be as honest as you can; reassuring the child that the choices the parent made had nothing to do with them and that you will be there for them. Give details as they can handle. Be honest about the duration of the process or incarceration.

When a pet dies

Pet deaths, even fish or hamsters, present you with an opportunity to teach about death. It is a part of life and denying or hiding it (the temptation is to replace it without telling the child) can actually make death fearful for the child if they find out. Be frank. Speak of your beliefs. Allow the child to grieve and be there for comfort. If the child becomes untalkative, you may have to initiate the conversation to begin their process. Cater the discussion to the age and ability to understand.

When there is a divorce among family or friends

Sometimes families are divided by divorce. This is a time to be honest with children and help them understand and not take sides. Keep conversations about what your family can do to help make it easier instead of dwelling on who was right or wrong. Include the family in your family prayers.

As with most things and most people, children need time to process major changes, whether that means illness, a move, unemployment or anything that will affect them, either directly or indirectly. By withholding parts of the story, you leave it to their imagination to fill in the blanks. 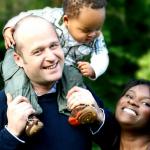 Tips For Blending Cultures in a Marriage