This is Seriously Relatable.

We know how hard moms work. Even getting kids ready and out the door each morning is a major feat, let alone all the other tasks that need to be done before bedtime.

One dad had the opportunity to experience for himself how hard moms work every day. On this unforgettable morning, his wife left early ... leaving him with the kids.

The young father recorded a hilarious video, telling the camera all about his adventurous morning with the kids.

"I will never in my life ever [my wife] what's taking so long again," he said in his video. "It took me an hour and a half to get both these kids ready."

As he tells the camera about the wild goose chase, the frazzled father holds his adorable son Roro in his arms. Roro seems completely oblivious to what a long morning his father has had. His oldest son, Jaxson, isn't in the video, but he certainly contributed to this dad's wild morning.

But that wasn't all

While this worn-out daddy spent his whole morning focusing on getting his children clean, dressed and ready to go, he wasn't done yet. Once he finally got his two children ready to head out the door, he looked down and realized he had forgotten to get himself dressed.

The kids aren't exactly making it easy on him

OK, now dad is dressed and just needs to get everyone out the door. Then Roro starts crying and screaming, while his other son is completely oblivious.

"Jaxson is no help," he said in his video. "He's on his iPad the whole time."

(I'm sure moms can relate.)

By the time they finally get to the car, this dad realized he forgot his car keys and had to run back upstairs to grab them.

Moms do this every day

This dad now understands how hard his wife has it. Moms work so hard just trying to get their kids ready for the day, but they do it with no thought of reward. They simply do it because they love their family.

Check out this exhausted father's hilarious video below! How many people can relate to how he's feeling?

This dad will NEVER again complain about how long it takes his wife to get the kids ready. Ever. 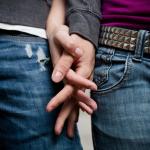