This is how your childhood neighborhood affects you later in life

You Probably Look Back Fondly on Your Childhood Neighborhood. But Did You Know It Might Have Hindered Your Ability to Succeed in Life?

As the old saying goes, sometimes you can't ever go home again.

But home will stay with you, especially when it comes to your success later in life.

Recent research from Harvard economist Raj Chetty found that a child's neighborhood affects whether or not they'll reach the middle class or higher as an adult. By using tax records from different areas of the country, Chetty found that certain neighborhoods and towns offer a better chance of income mobility.

For example, poor children in Atlanta have less of a chance of reaching the 80th income percentile compared to Salt Lake City children, even though adults in both of those cities have comparable incomes, KOB-4 reported.

This is likely tied to a family's economic situation and the educational surroundings of the child.

"The strongest predictors of upward mobility are measures of family structure," Chetty said.

This study came at the same time as another study written by Chetty and fellow researchers Nathaniel Hendren and Lawrence Katz, which linked a child's income successes later in life to their early childhood neighborhoods.

"Let me be upfront about my own reading: These two new studies are the most powerful demonstration yet that neighborhoods - their schools, community, neighbors, local amenities, economic opportunities and social norms - are a critical factor shaping your children's outcomes," The New York Times' Justin Wolfers wrote. "It's an intuitive idea, although the earlier evidence for it had been surprisingly thin."

That second study, done by Chetty, Hendren and Katz, also found that it's important for families to move to better neighborhoods sooner rather than later, showing that the years children spend in a neighborhood that offers them a better chance at mobility is important too.

"Their findings are clear: The earlier a family moved to a good neighborhood, the better the children's long-run outcomes," Wolfers wrote. "The effects are symmetric, too, with each extra year in a worse neighborhood leading to worse long-run outcomes. Most important, they find that each extra year of childhood exposure yields roughly the same change in longer-run outcomes, but that beyond age 23, further exposure has no effect."

But it may not be the problem with the neighborhoods themselves. After all, 80 percent of Americans feel positively about their neighborhoods and how they help families, according to the American Family Survey.

The problems may actually be linked to the education children receive from schools in these poor neighborhoods. A 2011 study from the American Sociological Review found that children who grow up in disadvantaged neighborhoods have less of a chance of graduating from high school, according to City Lab.

These educational setbacks will have long-term effects on those children, keeping them from getting college degrees or other job opportunities that will hand them financial success, CityLab reported.

To fix this, Matthew O'Brien of The Atlantic suggests helping parents understand more about the college system, which they can then use to inspire their children to apply for college and succeed in high school, no matter the economic class.

But for this to work, school officials will have to offer high school students college brochures and pamphlets to help them see where they can go to find help about learning in high school and how to apply for college. These brochures and pamphlets should also include information on where children can get financial help for the fees that are required to pay for college applications.

Helping these children find paths for better education can be the key to helping them avoid the damaging effects of their neighborhood, O'Brien wrote.

"Ask anyone about inequality, and you're likely to hear three words in response: education, education, education," O'Brien wrote. "Oh, and education. And it's true: school should be the ladder out of poverty. But too often it's not; if anything, the reverse. We need to stop failing early and failing late. In other words, we need to reach kids during those formative years before school begins, and to keep kids who are thriving in high school to keep thriving in the right college." 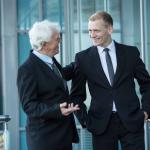 Want to Break Your Bad Habit? Make This…