These People Died and Came Back to Life, and This is What They Saw.

Whether heaven is real or not is something people will challenge until the end of time. There is nothing I could say that could really convince you to believe one way or the other.

We can read books and gather clues hidden in the Bible. But, to discover the truth behind heaven's mysteries, we should listen to the people who have actually planted their feet at heaven's gate.

Four people have shared their personal and incredibly moving experiences in heaven and answered the question we have all been asking: Is there a heaven?

"Toward the beginning of my adventure, I was in a place of clouds," Harvard academic neurosurgeon Dr. Eben Alexander wrote on Newsweek. "Higher than the clouds - immeasurably higher - flocks of transparent, shimmering beings arced across the sky, leaving long, streamerlike lines behind them."

To describe the beings as birds or angles didn't do justice to what he saw.

Alexander shared that the winged beings seem to be producing a sound that was so joyous. "The sound was palpable and almost material, like a rain that you can feel on your skin but doesn't get you wet," he shared.

Surrounded by millions of butterflies, he was given three messages from a woman.

After receiving these messages, he eventually awoke from his coma caused by a rare bacterial meningitis. These messages inspire him to this day.

An almost fatal crash led Don Piper to the head of heaven's gate. Piper shared his experience in heaven on "The O'reilly Factor."

Piper saw his deceased family members when he was in heaven. But they were not in human body form. He shared, "They were all fully recognizable as themselves, so yes, they were tangible. I could see them. And they were all perfect [...] But when I saw them they were all ageless."

He continues, "There really are a lot of magnificent structures inside the gate. And at the pinnacle of a great hill beyond them is a bright light. I have the distinct feeling that that is where God - and I was headed in that direction when suddenly I was returned to earth."

Piper knows he had a remarkable experience and says he can't wait to return back to heaven one day.

"I remember just closing my eyes in that bed and I opened them and I was standing in the most beautiful tunnel of light I could ever describe," Crystal McVea recalled in an interview with TheBlaze.

McVea was lying on a hospital bead, dying. But the difference she felt as she realized she was transported to heaven was noticeably profound. The negative feelings she once had were gone, and she said that it was as if all of the knowledge in the world was instantly downloaded into her brain.

As she turned to her right, she realized God was beside her. Although she had spent most of her life questioning his existence due to her many setbacks she had experienced on earth, she instantly fell before him in worship.

McVea expressed her feelings about heaven as radiant and glowing with light. She also shared that God gave her a choice to return to earth if she so desired.

"In that instance ... God showed me my four children and he told me I could go back and be their mother or I could stay there," she exclaimed. "For the first time in my life I chose God ... I chose to stay with him. I'm so glad that he allowed me to remember that."

As they moved toward heaven's gate, God allowed her to see a picture of herself as a child. While she looked at it, she felt she was looking at it through God's eyes. She felt God's love indicating to her that, even during times of sexual abuse and other trials, he had always been there for her.

After this healing experience of feeling God's love, McVea wanted to return briefly to earth tell her mother she was OK. She then opened her eyes and found herself back in the hospital with her family again. Although she wanted to return to the afterlife afterward, she stayed on earth to share her story.

According to a story on CBN, Hilary's truck flipped over four times into an abandoned field when she cried out to God as she hung upside down from her seatbelt, "You've got to help us! Please send your angels!"

After several people stopped to help her, she was placed into an ambulance where her spirit left her body.

She said that as her spirit rose from her body, an angel took her hand and she saw with her own eyes a gold mansion that was gleaming with vibrant colors.

Even though no one was responding to her, Hilary said, "There was no sense of frustration or sense of loss. It felt amazing - so much joy."

Hilary said, "I want people to know there is a heaven and to not give up hope. There were times that I was down and out, but I tried to keep my faith and stay strong and keep positive." 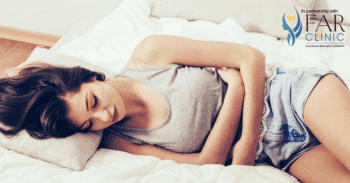