This is what postpartum depression sounds like (can you relate?)

This week, she shared what a normal day looks like dealing with postpartum depression.

You know what it's like having two young kids when you're pregnant?
A slow. living. nightmare

"I am often asked if I am 'cured' and if you can cure depression and anxiety. The best way I can ever explain anything is to tell a story," she wrote on Facebook.

Laura, the mom of two said it started off as a bad day. She went to an event she was already uncomfortable going to, but stepped out of her comfort zone.

"I arrived and was met with some funny looks, then there was some hurtful things said out at the park directed towards me 'yeah I know who she is and I can't stand her,' and Luca was the kid who was wanting to play with toys (what I thought was for everyone) with other kids where he was clearly not wanted.

"I felt my chest close up and my throat ... and everything in my body was pulling me out of there. I tried to say to Luca that we calmly needed to go 'but you said we would go on the swings', was his response to me. I couldn't even make it to the swings where I couldn't stop crying. We were there for 10 minutes.

"In that moment I was defeated. I felt embarrassed, hurt, and like I failed my child, that because I couldn't keep my emotions together we had to leave somewhere.

"He missed out on a fun day. He hugged me and said 'you're not crying!' And laughed. He was making funny noises as if to try to cheer me up.

"We got closer to the car where it was a mile away because we had to park so far and as the car got into view, he started to get upset. He wriggled free from my arms and said 'I don't want to go home!' And ran so far I could barely catch up to him. When I finally did I was sobbing and I was angry. All the embarrassment of before came out and all the worry of him running all exploded out my of my mouth and I yelled at him and grabbed him into my arms.

"I didn't say a word. I strapped him into the car and he started to cry even more and then I sat in my chair and covered my face and cried. We both cried. I apologised (sic) to him over and over for ruining his day and that I was sorry I yelled at him."

Postpartum depression is common. The American Psychological Association reportsone in seven mothers will experience it. And guilt, like Laura experienced, is a common symptom.

But it isn't always gloomy. There are positive moments, like what happened to Laura next.

"I was driving home and then we passed a McDonald's.

"We stopped, and I only had $4.00 in my account so I bought him an ice cream in a cup with two little chocolates. I said after your ice cream we can play in the playground ... and he said 'you're not angry anymore Mummy?' (In his toddler ninja/alien talk) I said 'no, I'm okay now. The day isn't going to end badly today.'

"And then by my surprise my cousin came in to order for him and his family. They're my favourite cousins and like my best friends. He only came in because the line for drive through was so busy. I believe it was fate ... I told him all about it and he said 'aww come over, we will make the day better.'

"Before we left, I made sure I kept my promise. My son ate his ice cream and he danced to the music in the middle of McDonald's and played in the playground.

"He played all around the playground until he got to the top, and he then got stuck ... I couldn't fit in there, so I was trying to help him down with my words ... I started to think the worst, that he'd get stuck and whatever else ... but then another little boy came into the playground and saw Luca and said 'I'll help him.' The little boy held his hand and brought him down the slide and they played for a little bit.

"Sometimes things happen and then you beat yourself up, but then you do something amazing and you know it was just a bad moment.

"Sometimes you can't see past the bad or the dark hole but every time you do it's closer to feeling recovered, even though you may never feel fully cured ...

"You can get stuck at the top of the slide, but your day won't end that way, I promise you. There will be a hand there that will come to help you down so you can enjoy the ride and learn to get back up again."

Today marks the last day of Perinatal anxiety and depression week, and what a week it’s been. I am often asked if I am “...

If you can relate to Laura, like so many can, keep hanging in there. Get the help you need and know that there is a light at the end of the tunnel. 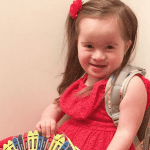 As the Weather Changes One Mom is Begging…