Do You Trust Your Husband Alone With Your Children? What About For a Whole Weekend?

If sharing a hilarious video of your child can get over 50 shares, what can a "good luck" post for your husband get? The answer: over 105,000 shares within 4 days.

Mother of 6, Meghan Oeser from Oak Forest, Illinois, left for a girls' weekend last week and wanted to give her husband some advice on social media. She went through the play by play of how the weekend will go as he tries to take on the role as super mom.

She describes dinner this way: "Dinner will suck. Bailey will want pizza, while Harper will ask for hotdogs. Quinn will cry when you say the word hotdog and will insist on mac n cheese (but not the orange kind or the white kind, but the purple kind). We'll be fresh out of the purple kind, so she'll then ask for toast. You'll already have started making mac n cheese for Penny, but since she heard Quinn ask for toast, she'll also want that toast. You'll end up tossing the mac n cheese, because Bailey got the stomach flu 5 years ago after eating the orange kind, and Harper prefers the white kind. You'll also forget about Harper because her friend Lily "unexpectedly" stopped by, so they went rip sticking down the street. Everyone will eat cereal for dinner, and Lily will come inside for a Band Aid."

Oeser said that her husband can, in fact, manage the kids fairly well. It was all just meant as a joke. She later told ABC news, "Never in a million years did I think it'd get over 105,000 shares."

When she got home from her vacation she said that she had a great time, but being with her family is so much more entertaining.

So, how did her husband do with the kids?

"He did fine, but he only got four hours of sleep," Oeser continues. "He never called me once."

This shows that a man can handle 6 children alone with few battle wounds.

For every birthday, we all smoosh into ole Bess and head to Dunkin Donuts for maximum consumption of donuts, coffee, and...

This story seems to prompt the questions:

Are all women worried to leave their kids alone with their husbands?

Are men not capable of being successful stay-at-home dads?

Your man is definitely capable. No matter who you are leaving your children with, you'll be a bit anxious.

These days, men frequently are the stay-at-home parent so the mother can work. But somehow, these families are still looked down on by many. Here are 10 reasons your husband should be given alone time with his kids.

1.Having a strong relationship with their father can prevent a child from experimenting with drugs.

2. Girls who spend time with their dad tend to have

higher self esteem then those who do not.

3. They know how to teach survival skills that may come in handy one day.

4.They'll be at every sporting event.

5.They enjoy playing pretend with them.

6.They are some of the most colorful readers.

7.They are great at cuddling.

8.They will sacrifice anything to make the children happy. Anything.

9.Their advice is different than yours, which is a good thing.

10.They will always catch them when they fall.

The next time you debate on leaving your children home alone with your spouse, remember the benefits rather than what the world wants you to believe. 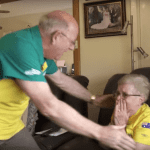