It May Be the Most Adorable Thing on the Planet, But if You're Not Using Extreme Caution, It Can Lead to Tragedy.

Not only do we love to see photos of other people (and their cute babies), but we also love to post our own. As we give out and rake in the "ooohs" and "aaahhhs" and likes and comments on all these pictures, internet safety isn't the only risk we should keep in mind.

Nothing quite gets a collective "Aw!" like an Instagram picture of a dad asleep on a cozy chair or couch with his sleeping baby on his chest. It's adorable, it's lovable and it shows a dad being, well, a dad.

But for some families, this innocent picture has turned tragic. Dr. Sam Hanke was tending his four-week-old infant son Charlie when he nodded off, waking hours later to find his son had died.

Charlie was an otherwise healthy baby. "I just sat down on the couch to watch some TV and he was kind of sitting on my chest. We were just hanging out and I nodded off," Hanke remembers. "A couple hours later I woke up and Charlie was gone."

The Hanke family isn't the only victims of this tragedy. Many infants die from suffocation while on couches or armchairs, next to or under dad. Often, this cuddly and popular sleeping pose, while seemingly innocent, can accidentally lead to death when the father (or mother) fails to notice the baby can't get air.

"Approximately 3,500 infants die annually in the United States from sleep-related infant deaths, including [SIDS]," states the American Academy of Pediatrics. Experts recommend a safe environment for sleep - no soft bedding and no co-sleeping. Instead, place infants face up on a firm surface.

When babies are co-sleeping with their dad on a couch, they seem to usually be positioned chest-to-chest. As parent and child are both sleeping, it's easy for the infant to slowly slip down into the couch or into a position that blocks the baby's airway.

While snuggling your baby is pretty much the best, and those dad-napping-with-baby pictures are the cutest, you have to make sure your baby is in a safe position and not at risk of suffocation or SIDS. If you are holding your infant and feel drowsy, it's best to place you infant in a crib or playpen face up and away from fluffy blankets or toys, and then take your nap. Or, if you find your spouse asleep with your infant like this, sure, snap a picture, but then move your baby to safe place. 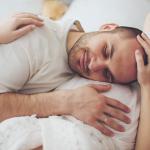 18 Intimate Things Every Woman Should Do With…