Thousands sign petitions to free ‘Making a Murderer’ subject – but will they make a difference?

A 10-Part Netflix Documentary Series Led to the Creation of Multiple Petitions to Free Its Subject. Here's What's Behind Them - and Whether They Can Do Anything.

The story of Wisconsin inmate Steven Avery opened viewers' eyes to the alleged injustice involved in his court case. Now, fans of the Netflix docuseries "Making a Murderer" are asking government leaders to open their eyes with petitions related to freeing Avery.

Kelly Lawler detailed for USA Today the two petitions - one on WhiteHouse.gov and another on Change.org. Both ask for Avery's pardon, with the White House one requesting the same for his co-defendant and nephew Brendan Dassey.

"Steven Avery should be exonerated at once by presidential pardon, and the Manitowoc County officials complicit in his two false imprisonments should be held accountable to the highest extent of the U.S. criminal and civil justice systems," CNN quoted the Change.org petition as stating.

Calls for justice began after "Making a Murderer" hit Netflix in mid-December, according to USA Today.

Avery's complex story hasn't only pulled audiences in but also made them want to do something, the report noted.

"'Making a Murderer' ... tells the story of Steven Avery, a man who served 18 years for a crime he didn't commit, was exonerated, and then was accused and convicted of murder," USA Today indicated. "Avery is currently serving a life sentence for the 2005 murder of Teresa Hallbach, but after watching the Netflix series, many viewers are a little more than outraged about that fact, arguing that it appears Avery may have been wrongfully convicted again. And they're not being quiet about it."

Scott Stump wrote for the "Today" website that critics have called the series "one-sided." The prosecutor in Avery's case claims the documentary's makers left out evidence, saying accusations Avery was framed are "irresponsible and inconsistent with a consideration of all the evidence presented."

However, "Making a Murderer" creators Laura Ricciardi and Moira Demos spoke with "Today" on other revelations the Netflix favorite have prompted about a decade later.

They also mentioned potential steps to bring justice the petitions call for.

So can the petitions achieve what signees hope - to show injustice has made Avery a murderer?

ABC News noted a hitch in that plan: Avery was convicted on the state level, and the president can only pardon federal offenses.

"Making a Murderer" viewers should consider another route, Leon Neyfakh wrote for Slate.

"Fans of 'Making a Murderer' who believe Avery deserves clemency should consider signing this petition addressed to Wisconsin Gov. Scott Walker, which has so far been signed by just 1,033 people," according to Slate. "That said, the effort is not likely to be productive."

That's because in regards to granting pardons, Walker's said he "won't do it," Slate reported. 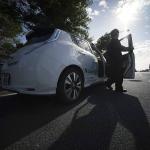 Self-Driving Cars Can Save You Lots of Money,…