Top 4 discussions all fathers need to have with their daughters

Daughters Rely More on Their Fathers Than You Realize.

A daughter's relationship with her father is very important. Fathers have a lasting influence on their daughters. While mothers do their fair share in raising their daughters, fathers are able to reach their daughters on a different, personable level. Which is why there are four discussions every father needs to have with his daughter. Each comes at different stages of life, but all can be shared more than just once:

1. "Think before you speak"

Girls tend to develop a culture of gossip and back-talking. But it doesn't have to be like that. Girls don't have to talk behind their friends' backs and say judgmental things about others. It starts by being taught correct principles by her parents and having them lead by example.

Fathers should constantly remind their daughters to think before they speak. They need to ask their daughters if what they want to say would hurt someone else's feelings. Sometimes this conversation happens after something mean has been said, but it doesn't hurt to consistently have this conversation not only with young girls but adolescent ones as well. Such conversations will stick with young girls and they will carry those things with them into adulthood.

Most importantly, fathers should lead by example. They have less of a judgmental tendency than women do and by holding to the example of being more positive around people and not saying something that could be mean or hurtful, it will have a lasting influence on their daughters.

2. "Believe and have confidence in yourself"

As girls reach adolescence they go through a lot of awkward changes. Not only is their body changing but they're going into middle school and high school where they are surrounded by judging eyes. Fathers need to discuss with their daughters the importance of having self-confidence. No matter how they look or how different they are from other girls, they are unique and have many strengths in places where others may be weak.

Not just in adolescence, but throughout the rest of her life, a father's constant reminder of who she really is will give her the courage she needs in order to seek after the things she wants most. She will find success because her father believes she can do it, and so she will have the self-confidence necessary to achieve what she wants.

Fathers must discuss with their daughters about never settling for something less. Every parent believes their children deserve the very best in life, but self-doubt can easily creep into her mind and lead her to believe she isn't worthy of the very best.

A father is able to prove to her she is deserving of the very best and much more than that. A father who reminds his daughter that her self-worth is more valuable than all the riches in the world will give her the confidence she needs to settle for more. Such teaching moments will be something she holds onto when she dates and finally meets the man she's supposed to marry. She will never settle for less than she is deserving of because her father told her so.

4. "There will always be people who love you"

Every daughter needs to be reminded that there will always be someone who loves her. Having a father tell his daughter how much he loves her means the world. Even if she shrugs it off and doesn't look like she appreciates it, such words of love plant a seed deep in her heart. When consistently reminded by her father, her family, and her friends how much they love her, she will remember that she will always be surrounded by people who love and appreciate her.

When the days get dark and lonely, she will always have a father who loves her. He will be there for her when she needs him most, when she needs a shoulder to cry on and an ear to listen. Knowing that she isn't alone and has people who love her will help her to get through even the darkest times in her life and power through.

Every father is capable of teaching his daughter true strength and the value of self-confidence. More than anything in the world, she needs to be reminded of who she is. Who she is in her father's eyes. Because while she may not be able to see the whole picture, knowing how her father views her and appreciates her will help her to become the woman she is destined to be. 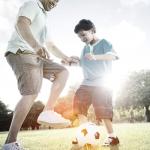 Why You Should Teach Your Child It's Ok…