Trying to put grandparenthood into words

A writer and first-time grandfather tries to explain the complicated emotions associated with spending time with his new grandson.

Editor's note: This article has been published in the Gwinnett Daily Post. It has been republished here with permission.

As a writer, I used to scoff at people who say, "There are no words." Of course there are words. There are always words.

However, after spending two weeks with my new grandson, I now understand what those people mean. When you hold your first grandchild in your arms . . .

Well, there simply are no words.

And yet, because I'm a writer, and have this column to write, and hope maybe to say something that resonates with other grandparents or grandparents-to-be, I feel compelled to try a few words, anyway.

I recognize, by the way, that I'm also guilty of something else for which I've occasionally sneered at others: thinking I invented something just because it's new to me.

So for the record, I understand that I didn't invent grandparenthood. I'm just in the process of perfecting it.

The first thing that surprised me about my grandson is how breakable he seems. I don't mean there's anything wrong with him physically; he's actually quite a strong, healthy little boy, thank the Lord.

It's just that holding him makes me think about how fragile life is, in a way I never thought about with my own kids. I used to just throw them over my shoulder, hang onto them with one hand and go about my business. I never worried about dropping them or them getting hurt. I figured they were tough. And they were.

But the temptation to treat my grandson like he's made of glass is almost overpowering. Maybe that's because he's not actually my kid. Or maybe the stakes just seem higher: If anything happened to him, it wouldn't just devastate me, it would devastate my daughter, which would devastate me even more.

And that abiding sense of fragility goes beyond physical well-being. I also have an overwhelming desire that nothing bad ever happen to him. And I mean nothing. Ever.

Of course I didn't want bad stuff to happen to my own kids, either, especially really bad stuff. But I always understood that bad stuff would inevitably happen, I couldn't always prevent it and I wouldn't necessarily be doing them any favors if I somehow kept them from ever facing adversity. That's how children develop strong moral character.

With my grandson, though, I find it difficult to contemplate any of that. I just don't want bad stuff to happen to him, period.

I've always heard people say that being a grandparent is better than being a parent. I'm not sure that's true. Being a parent has been perhaps the greatest experience of my life, up to this point.

But I have to say, even based on my limited experience, being a grandparent is at least as good: all the joy and wonder of parenthood, without some of the hassles.

And if that explanation doesn't help you understand - well, it's the best I can do with the words I have. 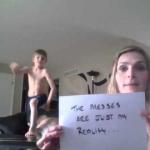 Use This One Secret to Save Your Sanity…