Unresolved guilt and its impact on the family

Is your family having difficulty with fault finding, blame, criticism, and ridicule? Unresolved guilt could be the culprit.

The familiar scene shows a courtroom filled with angry people, crying out for justice to be done. Although it may be a Hollywood exaggeration, it is often repeated in our own households. We become judge and jury to those in our families and mete out punishment as if we, too, were in a courtroom.

What happens to the family member who is convicted when they leave our presence? What memories will he hold in his heart? What legacy will she lean on when she is lonely and afraid? Will she think of our love, or will he hear us saying:

"I can't believe you did that! What were you thinking?"

"You shouldn't have. You knew better."

"When are you going to learn?"

According to the article How to Protect Your Family From Your Own Guilty Conscience, "Guilt is the body's red flag letting you know you have done something wrong." The guilt response brings discomfort for a purpose. Changing actions for the right makes the discomfort go away. Unfortunately, when guilt is associated with shame and ridicule, the darkness lingers, even after the individual has made steps to right the wrong.

In such cases, the guilt mechanism is known to malfunction, leading to self-punishment and self-critical thoughts and attitudes that become a "guilty conscience," permeating the life of the individual. As noted in Fault Finding and Physical Punishment by Parents Leads to Unproductive Guilt in Children, a number of factors come into play, including parental action, perfectionistic personality traits, and distorted thinking patterns. All manifest themselves in the form of fault-finding, blame, criticism of others, and ridicule.

Due to the highly negative nature of the thought patterns coming from the guilty conscience, automatic reactions are at risk of causing physical or emotional harm to family members. Check for the following:

These thought patterns are warning signs that indicate you are making assumptions based on incorrect information. Stop and regroup. Take 10 deep breaths. Choose not to act based on your current state of mind. Whether you are a parent who has brought emotional baggage from your childhood, someone who has been abused in a previous relationship, or a sibling who has witnessed horrific mistreatment of others, you can stop the cycle of abuse.

First and foremost, stop criticizing yourself

The best way to do this is to picture a stop sign in your mind every time self-criticism occurs. This technique is called "Thought Stopping" and is one of the "tools" from the Stop, Look, and Listen Emotional Survival Kit. Replace the self-critical thought with an expression of gratitude. For example:

Thought: "I am such a terrible parent. My children acted like animals in that restaurant. They're going to get it when we get home."

Replacement: "Whew, I'm glad that is over. Before we go to a restaurant again, we'll need to have some practice at home."

As you change the focus from self-criticism to gratitude, the bad feelings will give way to good ones, and you will feel self-acceptance. You will find that throughout each day there are numerous opportunities where positive thought replacements can be made. The guilt gives way to unconditional love.

Second, trade "should" for "want to"

If your thoughts are filled with the things you "should," "need to," or "have to" be doing for your family, trade them for "I want to." Rather than being a slave to required tasks say, "Iwant to fix dinner tonight," "I want to do the laundry today," and "Iwant to be happy." This simple change will transform your guilt into pleasure in your accomplishments.

Use your free will and choice to create a positive atmosphere for yourself and family. Find ways to enjoy being together. When family members do things that require correction, teach them instead of using shame or ridicule for punishment. Show them the skills needed to accomplish the tasks you desire of them. Fill their minds with pleasant memories of your interaction with them and you will find happiness.

Rather than telling family members that they must do it "or else," use the power of suggestion. "I would appreciate it if you would..." Point out the positive results of the desired actions. Then, give family members time to comply. Give attention through affirmation when you notice them doing what you wanted. "You swept the floor and emptied the garbage. The kitchen looks clean."

As you stop the negative effects of your guilty conscience by replacing criticism with gratitude, trading "shoulds" for "wants" and replacing threats with requests, you will find that the atmosphere in your home will change from feelings of ill will to pleasantness and peace.

Denise is a published author with an Education Specialist Degree in School Psychology. Additional writings are found at www.denisewa.com.
nextarticle 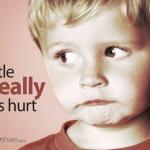 Honesty's the Best: Five Tips For Teaching Your…