What did he just say? 4 ways to curb a youngster’s foul-language habit

I don't swear. However, my 5-year-old son does. We are working on his self-expression and doing so with a few relatively easy steps. The most important thing to remember is that he's just a kid.

My son, now 5 years old, is a living legend around our neighborhood. On two different occasions, he's chosen to repeat a specific "choice"ť word. However, his notoriety does not originate from his use of the word, but where he chooses to use said diction - at church.

In our house, we don't swear; or at least I didn't think we did. We're not completely innocent. If a "swear word"ť is uttered, it's usually preceded by a relatively serious occurrence, such as an injury or the surprise visit from an in-law (though I elect to not share from which side of the family).

Several months ago, my sister and her family from Boston was visiting and staying with us. On Sunday morning, during one of her stays, both of our families all sat quietly on the church bench awaiting instruction. It was then, during a transition where only silence, and the occasional baby coos could be heard, my son elected to share with me a thought, which he expressed proudly in his outside voice, "Dad, when I see a 'Bad Guy' I will say, 'Oh S***!'"ť

Laughter, from three rows back, passed our bench and another two pews in front of us enveloped our area before I could thrust my hand over my surprised son's mouth; in an effort to thwart additional explanation.

When dealing with aÂ child who utters "less than attractive words,"ť no single measure can break all children of the habit. However, here are a few ideas that have worked for us and our kids:

1. Try not to overreact

2. Quickly (but calmly) explain why your child should not say that word

3. Give your child an alternative word

I was in a hotel, preparing for meetings the next day when I got a surprise phone call from my childhood best friend. We chatted for a minute about the weather in one another's locations when he said, "Oh, I heard what Landon said in his Primary class."ť

Surprised by the comment, considering my buddy literally lived an entire state away and I hadn't heard a report of anything humorous from his teacher or his mother (my wife) so I inquired.

It was then that he shared with me the narration given to him, from his wife, who heard it from my son's teacher.

The story, without all the details, pertained to a third member of the Godhead. You know, "The Holy"¦ The Holy"¦ Come on kids, help me out, here"¦ what's the answer I'm looking for?... The Holy"¦"ť

My son, who's story sounds like an urban legend (but it's true), pompously answered, "Holy S***!"ť

Rome wasn't built in a day.

Rich Day is an MBA from the Gore School of Business at Westminster College and the Co-Founder of STAY Capital and Bona Dea Nutrition.
nextarticle 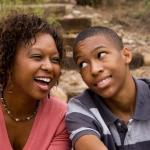 6 Tips For Listening to Teens