What happens to your brain when you hear your baby cry

Think you're only hearing your baby cry because he or she is loud? Think again.

It's almost impossible for parents not to listen to their baby's cry.

A new study out of the University of Toronto has found that babies affect adult cognitive functions in very distinct ways, sometimes rattling our ability to make everyday decisions.

The study found that infant cries make parents pay less attention to the task they're working on, more so than a baby's laugh. These cries specifically create "cognitive conflict," which controls our attention spans and is necessary to perform many everyday tasks.

"Parents are constantly making a variety of everyday decisions and have competing demands on their attention," said Joanna Dudek, lead author of the study, in a statement. "They may be in the middle of doing chores when the doorbell rings and their child starts to cry. How do they stay calm, cool and collected, and how do they know when to drop what they're doing and pick up the child?"

Researchers found this by playing parents a short audio clip of a baby laughing or crying and having them complete a Stroop task, which asked them to identify the color of a word while ignoring the meaning of the word. The researchers then measured brain activity, and found that there was reduced attention when they heard the baby cry.

Still, the researchers were quick to point out that this may mean that a baby's cry turns on someone's ability to respond to a child's distress - switching on our parenting skills.

"If an infant's cry activates cognitive conflict in the brain, it could also be teaching parents how to focus their attention more selectively," said David Haley, co-author and associate professor of psychology at U of T Scarborough, according to Science Daily. "It's this cognitive flexibility that allows parents to rapidly switch between responding to their baby's distress and other competing demands in their lives - which, paradoxically, may mean ignoring the infant momentarily."

All parents struggle to understand their baby's cry

Understanding a baby's cry is no easy feat, as newborns and infants tend to cry for a number of different reasons, including hunger, tiredness and discomfort, according to WebMD.

Babies will also cry when they're feeling sick, frustrated or lonely, essentially using tears to talk.

"Simply put, babies cry because they cannot talk," Elizabeth Pantley, author of Gentle Baby Care, told WebMD. "Babies are human beings, and they have needs and desires, just as we do, but they can't express them ... their cries are the only way they can say, 'Help me! Something isn't right here!"

Every baby sounds different, though, which sometimes requires parents to really listen to their child's voice to understand what they want.

In fact, as Nick Anderson wrote for Deseret News National, babies from different countries have different accents when they cry, even though they don't know language yet. This comes from a study out of the journal Current Biology that found that an infant's cry is shaped by their native language. For example, French babies have a "rising melody," while German infants have a "falling melody."

Thankfully, technology wants to make it easier for you to understand your baby

Still, understanding a baby's cry isn't an easy feat for parents because cries often mean different things for every baby. That's why researchers have tried creating technologies that can help parents understand their babies.

For example, the National Taiwan Normal University created a listening device that attempts to translate your baby's cry into words. It captures the sound of the baby's cry and uses data it has collected of other cries from babies made at similar times and frequencies to identify what's wrong with the child.

"Most parents learn to recognize different kinds of cries," a spokesman told kidspot.com. "But there are subtle differences that may escape even the instinctively tuned sense of a mother. Fortunately, technology has lent an ear."

Similarly, researchers at the National Taiwan University Hospital Yunlin created the Infant Cries Translator, which can identify four different crying sounds based on a database of close to 200,000 crying sounds from 100 different newborn babies.

"For the new parent like us, we are most afraid of seeing the baby crying and then not knowing what we should do. When we don't know what we should do, this app can make some simple judgments for us, so we are able to know what our next step is," new father Guo Young-ming told Reuters.

Parents can still understand their baby's cry without fancy apps

It's not exactly easy to get your hands on one of these devices. There are simple tricks everyday parents can do to find out what their youngster is crying about, too.

Eva Benmeleh Roditi, a child psychologist, said there are six different baby cries, like the slow, rhythmic cries or the high-pitched, screechy cries, that all have specific meanings as she explains in the video below.

Understanding these cry patterns can help parents understand both themselves and others to figure out what their child is trying to say.

"Unfortunately, your baby does not come with a translator. So it takes a lot of time, patience and a little bit of guidance to figure out what's she trying to say," Roditi said in a video for Bundoo. "But before you know it, you'll become your baby's No. 1 interpreter for the rest of the world." 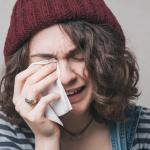 5 Things Your Wife Wants You to Do…