What to do if your child is being bullied

Keep your child safe at school and play by being a proactive parent when it comes to bullying.

As we send our kids off to school, we want is to ensure their safety and happiness. No parent likes to think about their precious child becoming a victim of bullying, yet a study done by the Olweus Bullying Prevention Program in 2010 found that 16.8 percent of students in grades 3 through 12 were bullying victims. Also, as tweens and teens gain greater access to technology, bullying is increasingly moving out of schools and onto cell phones and computers. Today's kids are never really safe from bullying.

As a parent, there are many ways to help prevent bullying and react to bullying. Here's what you need to know.

Is it really bullying?

Olweus defines bullying as "when someone repeatedly and on purpose says or does mean or hurtful things to another person who has a hard time defending himself or herself." Bullying often goes unreported when adults justify cruelty by saying things such as "boys will be boys" or "girls are just like that." It's important to remember that true bullying occurs again and again in a methodical manner meant to undermine an individual's sense of self-worth.

Some examples of bullying include physical violence, sexual harassment, dating abuse, intimidation, extortion, defamation of character, civil rights violations (such as teasing based on race, sex, or disability), and cyber bullying. Also, sexting is a form of bullying because it involves child pornography.

What can I do?

Psychologists have found that children and adolescents are more likely to report bullying to a parent before they report bullying at school. As a parent, you are in a prime position to protect your child from further bullying. While you may want to storm down to the school and demand fair treatment for your child, you'll get further by making an appointment and addressing your concerns in a rational manner. Many school districts have adopted anti-bullying programs and trained staff. Work with the school, and create a plan.

You should not, nor should the school, force a meeting between the bullied child and the bully. Studies show that this type of "mediation meeting" can re-traumatize the victimized child and give the bully an opportunity to talk his way out of deserved consequences. Also, teach your child how to prevent further victimization. While she won't have control over possible disabilities, sex or race, acting in a confident manner and surrounding herself with positive people may prevent future occurrences.

Above all else, show your child unconditional love. All children, but bullied children especially, need to feel unconditional love from their parents. Never make a child feel that he is at fault for being bullied.

What can I teach my child?

You can also help your child prevent bullying by limiting or monitoring her access to technology. Keep all computers in a central family area, and take away smartphones at bedtime. Also, consider banning apps such as Snap Chat that are often used to send hateful messages without a trace. Make your kids accountable for their words on social media and in texting, and enforce consequences both for bullying and for watching bullying without intervening.

As a parent, you can prevent and protect your children from bullying much more than you might believe. Keep an open dialogue with your children about their friends and problems at school. Communicate with teachers regularly and keep a watchful eye out for potential problems. If your child is bullied, act immediately. You are your child's first and greatest advocate, and you can build your bullied child backup. 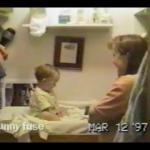 When Baby Says First Word, One Mom Will…