What to do when your child rebels against your faith

Though it is shocking and hard to accept when your child leaves your faith, you can pull through and keep your relationship intact.

I still remember the shock that coursed through me when my son announced that he didn't think he was going to go on a mission. It's common practice in my religion for children to serve church missions when they become adults, and my son had always talked favorably about the idea - until that day.

It's been several years since he made that decision, and, ever since, he has become firmer in his resolve not to go while I have become firmer in my resolve not to worry about it. I am letting him make that decision for himself, but it isn't always easy. As time goes on, he continues to decide which parts of my religion he believes and which parts he doesn't. Here's how I'm handling it.

My son is so much more than an extension of me. Yes, he has a lot of my personality traits. He has my genetics, and his smile is very similar to mine. We both share a love for movies and technology. But my son is his own person. He will grow up someday and head out into the world to make his own mistakes. He will love. He will get hurt. He will fall and (hopefully) get back up and be stronger. He will make decisions that will lead him to happiness or pain. As a parent, my job is not to tell him what to believe or how to act; it is to prepare him to make decisions for himself. When my son tells me he doesn't want to attend certain church activities, it would be easy to be hurt or offended and feel that he is pulling away from me. But then I remember that, as long as I give him the information he needs to make his own choices, it's not about me; it's about my son learning to trust his own decisions.

When my son first told me he had doubts about our faith, I'm pretty sure I politely argued with him. I probably told him that he'd grow out of his rebellious phase and would change his mind. After all, I never attended church as a child and later came to make it an important part of my life. "He'll grow out of it," I told myself. I have since learned that was not the right, or fair, approach. When my son tells me what he believes and what he doesn't, I don't argue with him. I let him tell me what he's feeling. I don't tell him he's wrong. I listen. And then I tell him that it's OK for him to feel the way he does. As long as he isn't doing anything immoral, breaking my rules or breaking the law, it's OK. The more I listen, the more he has a chance to talk through his thoughts with someone who won't take advantage of him or try to manipulate him. If I don't listen to him, someone less concerned with treating him fairly might.

If I don't listen to my son, I won't understand who he is and what kind of person he is growing up to be. I didn't do everything my parents wanted me to do either. In fact, I had to learn several things the hard way once I turned 18. I went through major ups and downs, but it was through my trials and several horrendous mistakes that I found my church and then learned to make better choices, becoming a better person. My faith saved me and made me who I am today. My father wasn't too keen on my decision, either, but if I attended the church he took me to as a child, I know I wouldn't be the same person I am now. My son has to make those same choices for himself. When he tells me he doesn't believe in key components of my religion, I tell him that, though I hope he'll someday change his mind, our differing beliefs don't change our relationship. I tell him that I'm willing to answer any questions he has about the church I attend. I tell him I love him and always will.

Knowing there is a good chance that my son will become an adult and never attend church again is still a bit unsettling. It helped calm my nerves, however, when I spoke to a young woman from my church who told me that, as a teenager, she had made decisions like my son's. At one point, she wasn't too thrilled about attending church, but time changed her mind and she is now very committed to her faith. Maybe someday my son will change his mind. Maybe he won't. But I have learned my son has a greater chance of growing up to make better choices than I did because I raised him with the tools and knowledge to do so. The rest, I have come to accept, is between him and God. I can't imagine a safer place for him to go with his questions. 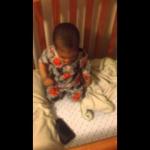 This Baby Wakes Up Happy Every Day