When God is silent

It's Been 20 Years Since My First Episode With Depression. I've Learned Much About Life and God, But the Fact Still Remains: I Don't Fully Understand Him - But I Do Finally Understand Why, in My Darkest of Moments, He Was Silent. and I Am Grateful.

I was 13 years old when I had my first major depressive episode. I was younger than my age implies; I was naive. I was innocent. The "worst" thing I had ever done at that point was probably, I don't know, watch MTV even though my parents thought they had blocked the channel.

I was raised to believe in God and was taught Christian values since infancy - values I strove to put into practice even in my young life. I went to church. I said my prayers. I helped my family and tried to love everyone I came in contact with — or at least not hold grudges or get involved in petty disputes. I did my best to follow God's laws and understand what He wanted from me. In essence, I was "doing everything right."

I remember lying awake for hours at night, praying for my pain to be lifted. It was an anguish so deep that metaphor completely escapes me. It was paralyzing. It was black. It was consuming. I thought, "If God listens, if He really knows and loves all of His children, then He will hear my prayers. He will know that I don't deserve this, that I've done nothing wrong. If I have enough faith He will take this away from me."

Time went on, and sometimes things were better. Sometimes they were worse. As the weeks and months and years went by, somewhere along the line I decided I'd had enough. But I didn't turn my anger at the depression, at myself, or even the people in my life who couldn't see what I needed them to see, even though I did my best to hide it from the world. No; instead, I got angry at God.

I often thought of the poem "Footprints," which tells the story of a man walking along the beach with God. He sees footprints marking the path of his life and notices that in his darkest hours there was just one set of prints, not two. When he asks God why he was abandoned in his time of need, God answers, "It was then I carried you."

I'd think about this poem and then I'd say to myself, "What a load of crap." Because God wasn't carrying me - He wasn't there, I thought; wasn't even with me at all.

It's been nearly 20 years since that first bleak episode with depression, though I've had many others that have been far worse. Through the decades I have learned so much about life and about God, but the fact still remains: I don't fully understand Him.

But of the many, many things that have changed since then, one thing remains the same: No matter how abandoned I have felt, I have never doubted that He is there, somewhere. Since choosing to believe that God does exist, I have seen evidence of Him even in the worst of times. I have felt the presence of heavenly help in countless forms, many of which I did not anticipate or even fully understand.

Now that I'm a parent, I'm starting to understand Him better and better every day.

Sometimes, I am not there when my children get hurt. Sometimes I'm not even there when they recover and move on from the fall. I cannot hold their hands and wipe their tears and guide them through every storm, or even rejoice with them through every triumph. It doesn't mean I don't love my children or that I'm not heartbroken when they are; it means I love them fiercely and want them to become more, because it is in those absences that my children find their own strength.

In those moments when I am not there, my children are discovering who they are, how they fit into the world around them and how to change their world. They are deciding each day who they can and want to be. In the end, these discoveries will give them the ability to trust their own instincts and rely upon their own strength. And I pray that they will be strong, that they will find stability and inner peace; that they will grow.

Changing myself and the world

When God isn't there, it doesn't mean He doesn't love me; it means He wants me to know who I am, as He does - as a brilliantly shining soul with divine origins; continual access to spiritual guidance and protection; and infinite, wondrous potential. He wants me to remember that I am all these things and more and to know that I am capable of conquering all obstacles.

And through it all, God lets me decide whether or not to believe, to decide who I am - and He gives me the space to change when I want to be someone better. And now, He is letting me change the world in the way that only I can, with all the wisdom and strength I have gained because He wasn't "there."

Editor's note: This article was originally published on Another Mormon Mommy Blog. It has been republished here with permission.

Lindsay is a Certified Assertiveness Coach and spiritual teacher helping women solve their own problems, meet their own needs, and follow their inner guidance by listening to the lessons their emotions teach. Learn more at www.LindsayMaxfield.com.
nextarticle 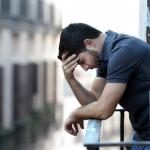 5 Things to Remember Once Loved Ones Have…