When God’s plan hurts the most

Sometimes God has a different plan in store for you and sometimes, it is the hardest path.

Editor's note: This article was originally published on Kayla Lemmon's blog. It has been modified and republished here with permission.

Yesterday was a hard day. And so is today.

My eyes were puffy - like they are now - because just twenty minutes before that I had bawled into my pillow.

I was supposed to be pregnant this time.

It had been a week and yesterday was the day I would take a test. It would OBVIOUSLY be a positive. I had all the signs and I was already prepping how I would tell my family.

I was supposed to be pregnant.

But, as if it were some kind of sick joke, the same thing happened. Within minutes, my answer came. No baby this month either.

It's been almost three years now that I've been going through this endless cycle, waiting for two minutes while biting the heck out of my nails only to see the same symbol every month and like clockwork ... explode into tears. I've been operated on, I've been cat-scanned, I've been medicated, I've been evaluated, I've been through boxes and boxes of ovulation kits. I've wasted pregnancy tests and I've chucked them across the room. I've said, "I'm done" more times than I can count but I still find myself tracking the calendar each month. I still dream about our baby.

It's the worst pain I've ever been through ... physically and emotionally.

Not many people see this side of me, though. I walk out of my front door and tell people around me with a smile that we're trying, that it's been hard, but we're excited for the day to come. It'll just take more time, I say. Diplomatic. Very non-dramatic. Please don't pity me I say in my head. And so no one sees it ... they only see that I'm tough. That I have faith.

No one except for one: My husband

And it's like I didn't notice it until yesterday. He's always so joyful. Even yesterday, when he was about to burst with excitement at our pending "news," he looked down at that horrible symbol and just grabbed me and pulled me toward him. I hit his chest and told him to let me go. He held me tighter. I told him not to pity me. He was silent. So I cried and he pet my hair and he covered me with a blanket and got me ice cream. He told cheesy jokes as I laid there, and even managed to get me to smile. He danced like a weirdo (totally wrecking his ego, but it's all for the laughs). Unaffected. Or so I thought.

Later that night, I came into the room after my bath and he was studying, a serious expression - a sad one - on his face as he stared forward. His face changed as soon as he saw me and he attempted to make me laugh. But I had caught it.

"Are you sad too?" I finally asked.

"This is the hardest thing ever," he answered, and I believed him.

But you wouldn't know it. His priority was to be strong for me. To be joyful. To stay put together so I would have somewhere to land when I fall apart.

He's heartbroken every month too. He wonders what's going on and he battles with the whole "why" of it. But he doesn't give up hope for me. He never isn't there. He never loses joy.

And I realized, so it goes with Heavenly Father. It hurts him too when we hurt. But his purpose is to give me hope. To give me strength. To be the voice that doesn't say, "Wow, this situation is dire" but to instead whisper to my heart, "It will be OK. Soon enough." To bejoy.

And still, that's the person I tend to get angry at. The one I can blame and cry to and get utterly upset at because he doesn't talk back.

But he feels the pain. Every part of it. ALL of it. And he sees the pain of people all over the world who suffer far greater than I do. Pains that I probably couldn't even begin to comprehend.

And somehow, without even realizing it, He steps in quietly and sits with me awhile. He does everything I can't and somehow gets me to do everything I thought I couldn't do.

Somehow I have a husband who has faith enough to look ahead with hope and make me laugh. Somehow I have friends who text me at just the right time to tell me they love me. Somehow I get the courage to stand up, wipe the tears, and face another day, another round, another try.

Somehow He stays in the room, probably holding a hand over mine, even as I complain about His timing and His plan.

This very moment, this unbearable task, is teaching us to be more like that.

I want to have children more than anything. My heart, my soul, yearns for it.

But more than that even, I wish to continue forward.

Kayla is an avid blogger and photographer, a wife, mom to two bunnies, and a new puppy. She enjoys the outdoors, tennis, and traveling.
nextarticle 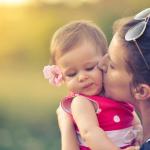 Is Being a Fantastic Parent Secretly Destroying Your…