When Your Child Loves Quirky Things

It Isn't About Driving Goats to School or Driving Children to Football Practice. It's About Making What Matters to Our Children, Matter to Us.

A few months ago, I found myself loading my son's two goats into a trailer to take to the elementary school. For most of the school year, my 10-year-old talked incessantly to his class about his goat Hank, then in the previous few weeks he began adding stories of his newest goat, Lily. Perhaps, in an effort to quell the talking the teacher generously authorized a special "show and tell."

With my husband unavailable that day, I had to pull a trailer with two goats the 1.5 miles to school. It was the first time I had pulled a trailer, and I spent the short drive vacillating between fear that I would have to use reverse with the trailer attached, and excitement about the look I knew I would soon see on my son's face as he showed the goats to his peers.

The story behind our second child turning his city-raised parents into pseudo farmers is a story for another day. In the course of that happening, I've learned a few things that may be valuable to other parents, regardless of whether their children own goats, swim competitively, or perform with a marching band.

I will never forget the day I arrived home and found my son fully dressed in "western attire." I had been out of town for a couple of days, and my husband had taken it upon himself to fulfill my son's dreams of owning his very own pair of Wranglers. But, a new pair of jeans apparently wasn't enough. A cowboy hat, belt, and buckle were added to the one piece of cowboy attire (cowboy boots) my son had owned when I left town.

At this point, I had never stepped foot in a "western store," I had never sat on a horse, nor had I ever, in my wildest dreams, thought I would have a "cowboy" as a son.

Six years later, cowboy boots and hats, belt buckles, and roping ropes are strewn throughout our house. As our son has pulled us into a genre we never thought we'd be we have gained an appreciation and respect for the varied and unique interests we each have. (I'll even admit that owning a pair of red leather cowboy boots is on my bucket list.)

I have a teenage daughter who is musically talented. Recently, she began playing the organ for our church congregation. Several times, I sit in the church while my daughter practices. She experiments with the switches and pedals, and often asks for my opinion or reaction. Her musical talent does not come from my genes, and there are times I really can't tell a difference between one note she played and another. On one occasion, I'm ashamed to say I told her, "Just practice and quit telling me about it."

Then it occurred to me it wasn't my opinion she wanted, she wanted to share her excitement and enthusiasm about discovering a new organ technique. Even if, my untrained musical ear can't tell what is happening, I am learning to listen and show a genuine interest in her discoveries.

I am not a natural optimist. Negative thoughts usually come to my mind before positive ones. With that said, I have learned how vital a positive attitude is to supporting our children in their interests. I don't love hauling a heavy pedal harp to performances, nor do I like the smell of goat feed in the back of my car. I don't love gymnastics shows with crowds of overeager parents, but my children don't need to know that. Or more correctly, they don't need to hear me say that.

Seeing my son walk out the school doors last spring with a big smile on his face while his school class trailed behind him is a picture in my mind I hope I never forget. Likewise, I hope my son will forever remember the sight of his mother standing beside a trailer in the school parking lot trying to quiet down 2 loud goats.

It isn't about driving goats to school or driving children to football practice. It's about making what matters to our children, matter to us.

Tiffany and her husband Mike are the parents of five children; 5-15. Tiffany loves the laundry five children generate, but could do without the sticky floors and dirty dishes.
nextarticle 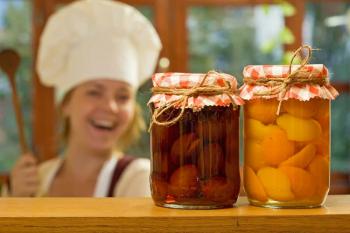 4 Reasons to Have Food Storage in Times…