Who Won the Iowa Caucus? Anyone Who Saw These Adorable Photos

There Was a Serious Amount of Back and Forth Tuesday Morning About Who Really Won the Iowa Caucus, But the Real Winner Might Have Been Families.

There was a serious amount of back and forth Tuesday morning about who really won the Iowa Caucus. Results showed Texas Sen. Ted Cruz at the head of the pack with 28 percent of the vote, giving him the win for the Republican Party, while Democratic hopeful Hillary Clinton and Bernie Sanders virtually tied for first place in the Democratic nomination.

Others said it was Florida Sen. Marco Rubio who won since his strong third-place finish shows his campaign has strong signs for the future.

But the real winner of the Iowa Caucus may have been the rest of America since a number of heartwarming photos of youngsters have emerged from the caucus.

These photos came after many caucusing American families brought their children to the different locations, Daily Mail reported. These children turned high school gymnasiums and elementary school cafeterias into virtual kindergarten classrooms and hangout spots, as the photos show.

"Rather than organizing babysitters, many busy mothers and fathers chose to bring along their kids, but the drama seemed lost on some of the youngsters," Daily Mail reported.

anyone covering the "children left in the hallway" angle at #IowaCaucus? pic.twitter.com/KjcwGj23PK

Other kids may have received various campaign stickers from the political candidates. And, as it always is with children, this led to some pretty funny scenarios. Take for example Sticker Kid, whose real name is Peter Clinkscales, who stood in the background of Hillary Clinton's acceptance speech with his face almost completely covered in stickers, Mashable reported.

Clinkscales is a student at Drake University where Clinton hosted her rally. He told Mashable he and his friend originally planned on bringing a saxophone to the event, but the security risk seemed too great.

But Clinkscales decided to show up to the rally without them to avoid any potential altercations.

In general, many states, including Iowa, allow parents to bring their children into the voting booth, but not all do since it requires children to wait in line during the voting, BabyCenter blogger Katherine Martin said.

This is something experts recommend doing, too. Citizen Next, a Canadian organization that looks to inspire younger voters, said it's important for children to start learning about democracy from an early age. Taking your children to the voting polls may be the first step in that process.

"More than anyone else in their lives, parents have the greatest influence on their children," Citizen Next explained. "When you talk about the electoral process with your children and bring them with you when you vote, you're teaching them that voting is important. You're teaching your children to be contributing citizens."

Still, parents should be cautious about exercising this option, or at least how they do it, especially if they want to see their children's political beliefs differ from their own. A Gallup poll found youngsters often follow their parents' political beliefs when voting, and that means the voting discussions of previous generations will only continue.

But family physician and parenting expert Deborah Gilboa told The Washington Post that voting is an important responsibility children need to be aware of many years before they have the ability to vote. It offers parents a chance to explain to their children the different election cycles and political positions.

Voting also shows children the power of voting, and how it can change society. It also allows parents the opportunity to answer questions that children have about how the U.S. political system and democracy work, The Post reported.

"Voting teaches kids and teens to be change-makers," The Post explained. "Demonstrate that you believe problems have solutions, and that the voting process consists of groups of people making decisions on how to generate those solutions." 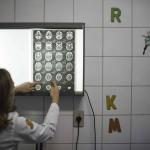 Find Out if Your State Will Be Hit…