Why Carl’s Jr. is making it hard on us parents

Our kids come to us naïve and sweet and innocent, and we want to do all we can to protect that innocence as long as we can, but it makes it hard when a company, or in this case a restaurant, tries to find a way around that.

You may or may not yet have seen the post gone viral by popular blogger Greg Trimble, A Letter From a Dad to Carl's Jr. and the Women in Their Commercials. If you haven't had a chance to read it, you should. Take a minute to jump over there, and then join me back here when you're finished.

My first reaction when I saw the headline come up on my Facebook feed was, "Here we go with an overly conservative opinion about the media." And honesty, if I would have read the article a few years back I probably would have thought it was a little overboard. But now I have kids. Kids around the same ages as this father's. And I get it. I totally get it!

Our kids come to us naïve, sweet and innocent, and we want to do all we can to protect that innocence as long as we can. Which we should. It is our job as parents to protect our children, physically, emotionally, and mentally.

So we come up with ways to be careful. We use Internet filters; we make sure we don't subscribe to cable channels that might show inappropriate movies or TV programs; we use parental blocks on our cable and Netflix subscriptions to be safe; and so on. It's not because we are being paranoid or prudish, it's because we're trying to keep them viewing age appropriate material. Trying to protect their young minds from images and ideas that are beyond their years and will only leave them confused and thinking about certain things much younger than they need to be.

But it makes it hard when companies try to find a way around that. They know that sex sells, and they don't care that they are showing these ads on channels and at times that kids will likely be watching. Their attitude seems to be, "If it brings more money in the end, it's not our problem." They leave it to us parents to sit down with our wide-eyed young children and try to explain something to them that's way beyond their years — which will probably only leave them more confused. If they happen to be the curious type, they will probably try to find ways they can find out more about it.

I know that we can't protect our children forever. I don't expect that. I fully understand that in a few short years my kids will be aware enough that this type of conversation will be needed. I just don't want to have to have that conversation much earlier than it should have to happen. I want my six-year-old boy to stay innocent as long as possible. I don't want to have to be left scrambling for the remote during a sports commercial break knowing that it's happened. He's seen that dang Carl's Jr. commercial.

It's the world we live in, but sometimes I wish it were a little simpler - that we could rewind about fifty years to a time when kids weren't bombarded with sexual images. To a time when if you wanted to see something promiscuous, you pretty much had to seek it out. To a time parents didn't have to feel on guard each time they watched a football game on TV with their family. I know it's unrealistic, but sometimes it's nice to wish.

And I don't think it's wrong for us parents to ask questions. So come on Carl's Jr., is it really necessary?

What can we do to make a difference? First off, don't support companies that use pornographic marketing tactics. Second, spread the word to your family and friends.

Lindsay is a wife and mother of two with twins on the way. She graduated in Communication with a minor in Human Development and Family Studies from the U of U, and has been writing professionally for eight years. Visit her at lifeasamomuncut.blogspot
nextarticle 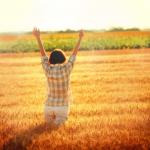 Wake Up on the Good Side of the…