Why get a college degree?

With all the doom and gloom surrounding the economic outlook for college graduates, does going for the degree still pay off? What are the short and long-term benefits of higher education for our families?

The global recession has caused many individuals to question whether the time and money spent on a college degree pays off in the end. A recent report by the Institute for College Access and Success found that, in 2012, seven out of 10 college grads had student loan debt, and the average amount of debt was $29,400. Adding to the bad news, unemployment and underemployment of college graduates is on the rise, with 8.5 percent of grads unemployed and 16.8 percent underemployed in mid-2014.

Many are starting to question the conventional wisdom that college equates to success, and enrollment numbers are continuing to fall for the first time in history. With all the doom and gloom surrounding college attendance, is it still worth it to go for the degree?

College graduates by the numbers

There are other measurable statistics about the benefits of graduating college. According to research done by Pew Social Trends, over half of all college grads are very satisfied with their current employment as compared to only one-third of less educated individuals. College graduates are also more likely to work toward a career path instead of taking a less-than satisfactory job just to put money in the bank. They are also more likely to stay in a job longer and achieve leadership positions within their company.

The benefits of college for a family

However, the value of a college education goes far beyond mere dollars and cents. College is the time for people to expand their horizons and gain a deeper world view, not just prepare for future employment. Seriously taking on college means learning perseverance, a value that parents will need later on as they raise children. Reducing the value of a college education to economic viability is reductive, especially within a family.

The long-term benefit for families

Children need their parents to model the passionate pursuit of education. When parents engage in the world, their children will follow suit. If readers breed readers and learners breed learners, then every parent should want to model thinking so that they cultivate well-rounded thinkers. It's true that a college education pays real dividends in terms of employment opportunity and salary, but the benefits certainly don't start or stop with the pay stub.

Getting a college degree is a highly personal, often difficult decision. While not everyone can pursue formal higher education, everyone can pursue learning. Whether reading a book from the library or getting a Ph.D, no education is ever wasted. Our families need thoughtful, open-minded learners at the helm creating the next generation of thinkers. 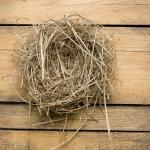 The Truth About the 'empty Nest'