My family loves to play games together. It is a tradition in my husband's extended family to spend a lot of time playing games. We've continued this tradition in our own family, spending weekend nights and vacation time playing party, card and board games. My husband and I host regular game nights, and my teenager has started having her friends over for games too.

It's not always easy to play games with kids. They like to change the rules and often pout when they don't win. It would be easy to give in and let them win, but I can't. Here are the reasons why.

To show them how to win graciously

It's fun to win, but I've learned to tone down my happy dance and not gloat. Teach your children to claim their win but compliment the other players on their game play. It's nice to offer to play another game to let someone else have a chance to win. Teach children that a gracious winner is someone who tries not to make others feel their loss too keenly.

To help them learn not to be sore losers

We've spilled many tears over lost games of HiHo Cherry-O at my house. For the 10 and under crowd, losing can be painful. It takes practice to get over being a sore loser. My son, in particular, used to have a very hard time losing. We had to stop playing games for a time so he could mature emotionally. Now he's fine with not being the winner. If you have sore losers, especially those who throw game pieces and stomp off, set clear behavioral guidelines before you begin.

To teach them that friendly competition is healthy

Kids who are allowed to win every time they play a game at home will be sorely disappointed when they go out into the world and don't win at everything. Beyond game playing, kids need to be able to compete and be friendly with others. They will be put into groups or teams at school and in other activities, and they need to know how to play well with others. Playing games at home teaches these skills.

To help them learn it is "just a game."

Games are supposed to be fun. It's no fun for parents to rig every game so their children can win, stroking their kids' tiny egos. If games are started with a lighthearted introduction, families and friends can have fun playing together. My husband is uber competitive at games. He's had to learn to lighten up too, and playing with the kids (and occasionally losing to them) helps.

If family game night competition is driving your family apart instead of bringing you closer together, try one of the following suggestions:

Since we have varying ages and abilities in our family, we often form teams for games. Sometimes it's more fun to win and less hard to lose when you play on a team. Team members can encourage and congratulate each other or commiserate as needed.

We've found that most party games are more fun to play without the suggested scoring methods. If you take out the competitive elements of games, you play for fun, not for the win.

Give young players an advantage

Young children who are just learning new games often get confused or feel frustrated when they lose constantly. Give these players an advantage like extra help or extra turns so they can have fun playing too. In my husband's family, being allowed to play with the adults is a rite of passage that means you have to act like an adult, but there's always a sympathetic aunt or uncle ready to give young cousins a tip on how to play.

Many popular adult games have a junior version. Consider playing the junior version with your kids so they are not at a disadvantage. Often the directions, rules and scoring methods are simplified for easier play, making the experience more enjoyable for the family.

Don't give up on playing games if you've got kids who can't stand losing. Instead, hold your ground and play fair. You'll be teaching your kids important lessons that will help them be winners in life. 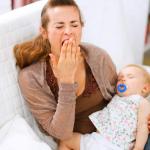 Truths Every New Mom Should Know