Why Life is Not Fair and Other Childhood Myths

Do Your Kids Ever Whine, "But That's Not Fair"? How We Respond to This Complaint Can Either Drive Us Crazy or Make Us Stronger Parents.

Parents often worry about damaging their child's self-esteem. One of the biggest concerns is whether they're treating their children "fairly." Now, this is the #1 tool in the "Kids Arsenal of Guilt-trips." All children were born with one of those. So your child will whip out her favorite tool of choice and howl, "But that's not FAIR!"

May I share with you a little story? It is the story of "The 3 Ralphs" written by Marlo Thomas. (Yes, THE Marlo Thomas.) I'll paraphrase the story. Some dedicated, wonderful parents had a son and named him Ralph. Then they had another child - a daughter - and decided they had to be absolutely fair, so they named her Ralph. Then, they had a baby and named her Ralph, too - just to be fair. They wanted to be fair to all of their children so when it was time for the kids to do their homework, they made all of them do it - dumping books in the baby's crib. All the kids had to wear diapers because that was fair. All the kids had to take long naps, just to be fair. All had to wear braces to be completely fair to all.

Time goes on. Of course, the kids are complaining. The parents say, "Where did we go wrong? We treated you exactly the same! Isn't that fair?" The children said they did NOT want to be treated fairly. Maybe, once in a while, the parents could treat them differently. So, they said they would try. They asked the kids what names they wanted. The children all chose to stick with Ralph. Yet, from then on, the parents treated them differently.

I love that story because it shows how absurd it is to try to treat our children absolutely "fairly" (or the SAME) all of the time. Frankly, I think the best answer to, "It's not FAIR!" is to say, "Yup, you're right. It's not fair." And, get on with it. Of course, they will howl with protest. Oh, well.

Most parents do a very good job of treating their children equitably. Occasionally, we will treat one child differently than the others, but that is usually done with reason either financial, personality issues, time issues, or whatever.

We need not get hooked into this argument. Just refuse to go there. Say, "Well, life is not fair. That's that." Don't argue, don't explain. Because to a child, "fair" is really them getting their way. Don't succumb to this complaint. It will never make any difference, and the self-inflicted guilt will chew you up.

Tool #2 in the "Kids Arsenal of Guilt-trips" is "But WHY?" Now this seems like a reasonable question, doesn't it? After all, we should have a logical reason for every decision we make. I'm sure you have all the time in the world to sit down and articulate this point, at your child's level of understanding, every time they ask it.

It's time to get ready for school. Sheri is dawdling and will soon be late. "Sheri, hurry up and make your bed." "But WHY? I'll just be sleeping in it again tonight." "Sheri, put on a clean outfit." "But WHY?" "Sheri, we need to leave a couple of minutes early today so hurry." "But WHY?"

I know you would be delighted to stop for every one of those requests and give a detailed explanation so that Sheri will feel much better about your requests. Yeah, sure.

John Rosemond, a parenting educator, describes it as "The Save-Your-Breath Principle." He states, "Until a child is old enough to understand the "Why?" of a parental decision, no amount of words will do. When the child is old enough, he'll be able to figure it out on his own. In either case, save your breath." He continues, "Today's parent seems compelled to provide explanations when children demand to know "why?" or "why not?" Despite the obvious fact that explanations serve no purpose other than a child's need to argue, parents continue to provide them."

Children think that if they can argue enough, they can wear their parents down and win. They're very smart creatures. They will persist with questions and demand explanations until they can either get the parents to give in or give up. Often, parents do. It's like gambling. If they think they have a chance of winning, they'll keep trying.

By and large, you will make better decisions than your children because you are an experienced adult. Take comfort in that. Don't feel like you have to explain everything. Say, "Because I said so." Or "Because I'm in charge." Whatever strikes your fancy. Do not get sucked into this guilt-trip. Take a vacation, instead.

Merrilee Boyack is a mom of four sons, grandma to two and an attorney, author, and professional speaker.
nextarticle 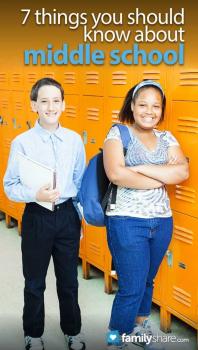 Top 7 Things You Should Know About Middle…