Why My Kids Don’t Have a Cell Phone

This Article Has Been Previously Published on Tips From a Typical Mom. It Has Been Modified and Republished Here With Permission.

In my home, we have three phones. I have a cell phone, my husband has a cell phone and we have a "Kids" cell phone which acts like a home phone since we don't have a land line. My kids are allowed to take the "Kids Phone" with them when they need to. This phone doesn't have a data plan and they can't play apps on it. They can only call and text. This is the phone my children can use when one of them needs a phone for a certain activity.

So maybe a better title for this post is "Why my kids don't have a DATA plan!" But I know that if I titled the post like that it wouldn't have caught your attention.

I bet that story sounds familiar to you. Maybe your daughter is the one with her nose buried in her phone all day long or maybe your daughter is like mine and likes to actually DO something when she is hanging out with her friends. I know you know this is a problem, and if you don't, maybe you need to put down your device too.

They need to learn how to work for the things they have. Now the fact that they are not mature enough to have a cell phone is a whole different reason. Having the power to post and text pictures or text whatever comes to mind to someone, all day long, everywhere they go, scares the life out of me.

Can I just tell you how much I HATE the fact that teenagers these days can't see the world or the people around them because their faces are stuck looking down at their phones?

Can I just tell you how much I HATE the fact that they are addicted to games?

Can I just tell you how much I HATE the fact that they think they can say whatever they please just because the person they are texting to isn't right there with them?

Can I just tell you how much I HATE the fact that they can take pictures of anything or anyone and instantly post them on social media sites regardless of permission from the person whose photo they just took?

Can I just tell you how much I HATE the fact that phones are now being used as a bullying device?

WAKE UP KIDS! There is a beautiful world around you. There are beautiful people around you who would love you to LOOK THEM IN THE EYES when you are talking to them.

1.Your kids don't have a cell phone?

2. How do they call you when they need a ride home?

There are such things as land lines people, and guess what? My kids' friends have cell phones so they can just use theirs. Yep, I'm mooching off your kids.

3. How do they get a hold of you when they are in trouble?

4. How do they listen to music and communicate with their friends?

Media Player, and they use their mouths.

My kids DO have media players. They asked for them as their only gifts for their birthdays (since they were expensive). They also used Nana's birthday money to help pay for them. They take better care of them knowing they had to pay for them themselves. They know how much they cost and how much they'd have to work to get a new one if theirs was broken. I can text them through an app when they are connected to the Internet at HOME. My kids do not take their media players with them when they leave. They stay at home. Safe and sound.

At home, Internet restrictions are a way I can control how much media my kids are exposed to. We don't have cable in our home, but we do have Hulu and Netflix. I can password protect my Internet and give the kids the password when their chores and homework are done. That's hard to do with a phone.

I can't stand the fact that kids are not learning respect for others because their noses are constantly buried in their phones EVERYWHERE they go. They don't look up when they are talking to someone. They aren't learning how to actually have a conversation with their friends when times get hard. It's all being done through texting now days. This is doing them a disservice, how are they going to know how to actually communicate with a spouse or their own children if they don't have to deal with conflict in person?

It's totally fine to play with apps and text friends, as long as it's at an appropriate place and for an appropriate amount of time. Not all day long, everywhere they go.

I know some of you will argue that giving kids cell phones will keep them safe, but I would rather give my kids problem-solving situations and have them figure out what to do rather than calling me all the time for every little thing. My kids know how to get a hold of me when they need to. There has NEVER been a time that they haven't been able to get a hold of me. Think about how the world was before there were cell phones. I survived, did you? 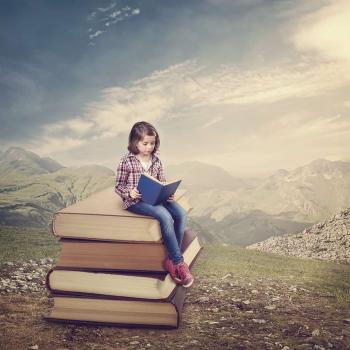 The Value of Reading Good Books