Why Taylor Swift’s assault testimony matters as a mom

Taylor Swift's Unflinching Testimony After Her Alleged Sexual Assault Should Be Required Reading For Girls Everywhere.

As a mother of two daughters, I'm basically in love with Taylor Swift right now.

And not because my fifth-grader plays her song "You Belong With Me" on an endless loop in our family room. In fact, I love Swift in spite of that fact.

I love her because of what she did for girls everywhere recently in a trial where she stood up for herself after being victimized by sexual assault.

The trial stemmed from a 2013 incident when Swift accused DJ David Mueller of groping her. Mueller sued Swift in 2015, saying she falsely accused him and cost him his radio job. Swift countersued for $1, and took the stand in August to defend her story, and the jury agreed she had no fault in Mueller's firing.

We talk a lot to our girls about how "no means no" and how they and they alone are in charge of their bodies. But here is a woman who is walking the walk, standing up unapologetically for her account of what happened to her that day (and doing so, by the way, in the face of extensive efforts by opposing counsel to make her question her own memory).

Let's take a look at some of the girl-power awesomeness:

When asked about Mueller being fired from his job, Swift responded: "I'm not going to let you or your client make me feel in any way that this is my fault. ... Here we are years later, and I'm being blamed for the unfortunate events of his life that are the product of his decisions - not mine."

This simple sentence cuts to the core of what I want my children - daughters and son - to understand in a very real way. Victims are not at fault. Every man and woman has agency to choose, and when someone chooses to be a sexual aggressor, that decision falls squarely on their shoulders alone.

When asked if she was critical of her bodyguard for not stepping in, Swift replied that she was being critical of Mueller for where he put his hands.

She refused to let subversive questions in the courtroom knock her off her game. She didn't let opposing counsel let her doubt the truth she knew, or to lessen the responsibility of the alleged aggressor.

When the lawyer showed the photo (taken from the front) of Mueller allegedly grabbing Swift from behind, he asked why her dress was not out of place, Swift replied simply and succinctly that it was because her rear end was in the back of her body.

Sure, Swift could have gotten into details about the logistics of dress hems and photo angles, but she didn't. She just boldly stated the facts, and refused to quibble over distracting details.

And I think that's what makes her testimony so amazing: although she had been victimized, she refused to become a victim. She refused to get into he-said-she-said arguments, or allow anyone to make her less credible or less worthy.

She sent the message loud and clear that she would be telling this story on her terms, and she was in control.

For my own daughters, I can't think of a better message. Their bodies are their bodies. Period. Their truth is their truth. Period. And no one can take away that from them, no matter how hard they try.

Erin Stewart is a regular blogger for Deseret News. From stretch marks to the latest news for moms, she discusses it all while her daughters dive-bomb off the couch behind her and her newborn son wins hearts with his dimples.
nextarticle 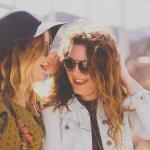