Why this woman created a ‘Talk to a Muslim’ stand

Mona Haydar of Massachusetts recognized the tension Muslims face after recent tragedies. Here's what she did to try to create dialogue.

Mona Haydar decided the best way to take a stand against anti-Muslim misconceptions was to make one.

So she and her husband, Sebastian, did just that.

The Cambridge, Massachusetts, couple created a stand with an "Ask a Muslim" sign hanging over it, with Haydar, a Muslim, offering free coffee and doughnuts - along with conversation, NPR reported.

Haydar told NPR she and her husband found inspiration for the idea from a "This American Life" segment where an Iraqi man had done "Ask an Iraqi."

Haydar summarized experiences while at the stand for a day in a Facebook post that garnered more than 13,000 likes and almost 8,000 shares at the time of this writing.

Today I stepped out of my comfort zone and stood out in a public space holding a box of donuts in front of signs that my...

Most of the post's responses were positive, with a little anti-Islam sentiment, offering Haydar an opportunity to teach a "clear lesson" that there's hope for bridging the gap, Mathew Rodriguez wrote for Mic.

"Keep your heads high, dear Muslim family," Haydar's post read. "The world is a good and beautiful place with small pockets of hatred here and there. There is an overwhelming amount of love and so remember this post when you are faced with bigotry and hatred towards you or your faith. Remember that you have supporters too."

Steve Annear of the Boston Globe also reported on the conversations - some lighthearted, others tense - Haydar had with passers-by. The stand's owner discussed growing up Muslim in the U.S. and presidential candidate Donald Trump's recent comments about keeping Muslims out of the country, among other topics.

"I'm feeling super-positive about any type of spontaneous, civic, press, or public engagement, because clearly there is a situation in which an unusual modicum of Americans don't really know what the religion is about," Mazen told the Globe. "I'm definitely supportive of anything that supports intercultural or interfaith sharing."

In fact, another Facebook post by Haydar indicated Muslims had asked her for tips in regards to doing the same thing to discuss the faith.

I've heard from a lot of folks that they want to try the "Talk to a Muslim" booth idea or that they already have! I'm so... 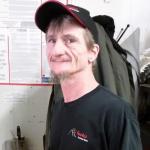