Will your children choose God or the world?

Read about two boys who played by a river, making decisions that led one to church and one away.

I remember the day that my son didn't come home from school. I had just started my first full-time job. His sisters called to tattle on their rebellious brother who went with friends instead of coming home.

Day one, I sent his father looking for him. Day two, I went looking. Day three, I quit my new job. I came home and had a heartfelt talk with my son. We found he had gone to the river with a boy who was not a good influence where he had tried his first cigarette. We made changes in our life in an effort to help him make better choices.

The first thing we did was limit his time with his friend unless we were present. The second thing we did was find better friends for him to spend time with. We turned to our church and found other young men with similar values who would be a better influence on our son.

I would like to say that our son thanked us for keeping him away from his best friend. I'd like to say he was overjoyed to put on a suit and go sit in a pew for an hour and a half every week - but I would be lying. Initially, it was really tough. But, we had several things going for us that led to our son deciding to go to church on his own.

1. Make church part of your life

I wish that I had always been a regular churchgoer and saint like, but I haven't been. However, when your children start repeating any four letter word that comes out of your mouth you find yourself having to choose who you are going to be - what example will you be in your home - I chose church. My children watched me choose church. They watched me embrace it and be grateful right out loud for every positive thing it brought into our family and lives.

It is never too late to make church a part of your life and invite any positive influence it brings into your children's lives. As you choose church and experience personal or spiritual growth, your children will grow with you. Your healing will bring them health.

I worked at making family get-togethers with other couples from church that had children my children loved to be with. We created lifetime friendships with families that were positive examples and fun. Their children attended church with our children. They became lifetime friends, college roommates, football teammates and so much more.

After I told my son he would have to choose different friends, some of the boys from our church chose to seek him out and fellowship him at church and school. They encouraged him to play football. Ten of them played on our small town football team. They took state and my son watched. My son later became football co-captain. He spent his teenage years camping, going to activities, hanging out and spending Sundays with his friends from church who were all great influences on him.

3. Bring church into your daily life

Church is a state of mind and a way of life, not a Sunday meeting. Bring it into your heart and your home. Pray together, read scripture together, watch uplifting entertainment and listen to music your pastor would approve of. Make your home a sanctuary as sweet and welcoming as a warm and welcoming church. Open your arms and find pastors or youth group leaders who will also open their arms and invite your children into a community's loving embrace. Surround yourself with heaven on earth.

The power of love overpowers the force of evil. You can never force someone to choose God. You would never force a neighbor or friend to believe what you believe. The very nature of force is in direct opposition with the Savior's plan. He stands at the door to our heart and knocks, waiting for us to open the door and let him in. Joshua 24:15 reads:

"...by a pureness, by knowledge, by longsuffering, by kindness, by the Holy Ghost, by love unfeigned."

It is not often that a story comes full circle. Many years later my son was a police officer locally. I received a text and phone call. He said, "Well Mom, you were right." Words every mother waits for. I laughed and asked him about what.

He said, "You will never guess who I just drove to jail. Remember the boy by the river that I smoked with? I just drove him to jail for dealing drugs."

Broken hearted friends, a police officer and prisoner reminisced about choices made and days gone by. They both agreed that day by the river was a cross roads, a moment in time that poet Robert Frost spoke about in his poem The Road not Taken.

"I shall be telling this with a sigh

Two roads diverged in the wood, and I -

I took the one less traveled by,

And that has made all the difference."

As a family we all just all went to church together. It was a matter of fact and just how life was. His friends were always there to greet him and still are. Now my son teaches young men and looks after others who stand at the cross roads of life. Choose this day which road you will take. 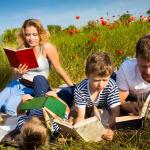 Creating a Culture of Literacy in Your Home