Amy Amos and her children were returning from a fun pool day when a regular, summer day almost turned into a complete nightmare.

As Amos unloaded the car, her hands were full and she had to use the restroom. She walked inside the house, and assumed all her children made it out of the car and were right behind her. She didn't think a thing of it, as she had left the car doors open just in case one of her kids was still in the car.

She realized someone was missing

About 10 minutes later, she realized she realized someone was missing. Wondering where Henry was, Amos looked everywhere around the house before she came to a horrifying realization - Henry never made it out of the car.

Amos found Henry and said, "The doors were shut, he was sweating and sobbing with his face pressed against the window."

Luckily, Henry made it out of the car completely fine, but his mom couldn't believe it actually happened to her. She said, "I'm sure you all are like me - you think you would never forget your kid in a hot car ... It could happen so easily. I realize this now."

It could happen to anyone

Amos also said that it was completely normal for her almost four-year-old son Henry to take his time coming in the house after a car ride. "He often walks inside slowly, stopping to look at random crumbs in the car seat or ants on the ground ... He knows not to wander off, he knows how to open the front door by himself. My older kids were also walking inside, he wasn't even alone," Amos wrote on her blog.

Even when she thought little Henry was perfectly fine, he was in grave danger. While Henry was on the car floor searching for his lost flip flop, one of the older kids thought he already went inside so he closed the door. Henry didn't know how to open the car door, and panic set in for the toddler.

After the incident, Amos explained to all her kids how easily young children can get locked in hot cars and how fast it can turn fatal. She also made sure to tell her kids that before they closed the car doors after getting out, they should always make sure no one is left in the car.

Amos is also teaching her little guy how to open the car door and unbuckle his seatbelt in case of an emergency. She makes a great point when she says on her blog, "We have fire drills. Why not car escape drills? We teach them how to swim, how to float on their backs if they fall in the water accidentally and can't get out, yet we don't teach them how to get out of the car sitting in the driveway."

Amos wants every parent to avoid the situation she was in that could have been deadly. Her final plea to all parents says, "Please take ten minutes of your day and be sure your kids at least know how to push the buttons and honk the horn if they accidentally get in the car alone, and have them practice opening the doors from the inside if they're strong enough."

This small practice could literally save your child's life, so please be aware and teach your kids how to escape a car, even if you think it will never happen to you. 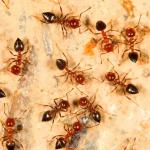 6 Simple Ways to Get Rid of Ants…