After 15 Minutes of Tantrums, She Took Matters into Her Own Hands.

We all know that feeling when you've settled into your seat in an airplane, you close your eyes and begin to drift off to sleep and then you hear it: a baby starts crying.

The first response is probably frustration, right? You're stuck in tiny rows, full of people, thousands of feet in the air, so there's not much you can do about a crying baby.

Kesha Bernard was all too familiar with this feeling when she boarded a plane on her own, excited to have a break from her own children (though she assures us she absolutely loves her kiddos).

But before her flight left the gate, a baby started crying

In her Facebook post, Bernard said she was able to tune out the crying because she's "used to crying and whining," something moms are familiar with.

Then, a toddler started to cry - the older sister of the crying baby. "I have mom powers and totally ignore it," Bernard said. But what she couldn't ignore was how the people on the plane were responding to the poor mother in need.

"The older men beside me made remarks like 'obviously her way of discipline isn't working,'" Bernard said in her post.

This mom also wrote that a woman sitting in front of the toddler was upset that the screaming girl was kicking her seat, so she reached back and grabbed the three-year-old's leg.

"I sat here for 15 minutes waiting on someone closer to this woman to offer to help," Bernard said, but no one went to help this mom or her children.

But, no one came to the rescue

Bernard said she turned around to see people mumbling and staring at this poor mother, struggling with her three children, all on her own.

She said one woman on the plane was even covering her ears with her hands to try and block out the noise.

When Bernard realized no one else was going to help, she decided to get up and talk to the mother, who surprisingly, was handling the whole situation very calmly.

"I would have already been crying but she was doing so good," Bernard said on her Facebook page.

When she approached the struggling mother, she asked her if she needed any help. Without hesitation, the mother handed Bernard her crying baby.

Bernard sat back down at her seat to prepare for take off, and the baby instantly stopped crying. Soon enough, the sweet baby fell asleep in Bernard's lap.

Here I am on vacation away from my kids (who I absolutely love to death but sometimes you need a break from toddlers)...

Her message to everyone

"My point???? Be nice and considerate," Bernard said. If anyone needs help, help them.

She went on to say that complaining and mumbling won't do any good, and it will just make whoever's struggling feel worse.

Bernard ended her post with these wise words: "Please be kind. Please be considerate. Help one another."

That poor mother was lucky she had Bernard to help her out. When Bernard shared her experience on Facebook, the post went viral, receiving over 200,000 likes and 100,000 shares.

I like to believe that if I were in that situation, I would have gotten up to help the mother with her hands full. Hopefully, with the thousands of people who have seen Bernard's post, more people will be inspired to do what she did and reach out to those who are struggling. 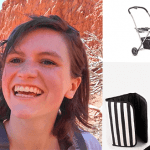 Every Mom Must Own These 8 Products (According…