Yes, I have five kids. No, I’m not neglecting any of them

You Can't Tell if the Kids in a Family Get Enough Love and Attention Just by Counting Heads. so Why Do so Many Strangers Who Meet My Big Family Think They Can?

"Wow, you have four brothers and sisters? That must be hard for you to have a new baby in the house again," a well-meaning lady in her 50s once commented to my daughter.

Knowing what response was expected of her and not liking to contradict adults, my 9-year-old lowered her head and quietly said, "Actually, I like having babies because they're cute."

"Oh!" the woman sputtered, surprised at my daughter's answer. "Well... that's good, I suppose. You certainly have enough of them!"

I have five children, and that makes my family an object of interest to pretty much everyone. Some of the comments we get are positive, but under many of them there's an underlying assumption.

People assume my kids are somehow not getting their needs met.

They think because we have five children, my husband and I must not have time for each of them. It's part of a larger double standard for big families. If you don't have a large family you probably have no idea what I'm talking about, but if you have a bunch of kids, you probably understand perfectly.

If you have two kids and one has yogurt smeared on her face and throws a tantrum in the produce aisle, she's just being a kid. Yet if the yogurt-covered tantrum- thrower has four or five siblings standing by, strangers judge more harshly. "Aha!" they will say, "Those people have too many children to handle!"

If a mother works full-time outside the house and has two kids, no one bats an eye. But if a mother like myself stays home with her five kids, strangers assume they're all starved for love and attention - despite the fact that I spend all day, every day with them.

My fifth baby was a preemie, struggling to breathe and eat on his own at birth and then lagging behind in almost all his developmental milestones after that. When other kids his age were crawling from point A to point B (and some overachieving babies were even walking), he was lying on his back and using his feet to push himself around.

"Is he still getting physical therapy?" a casual acquaintance asked, watching him scoot across the floor.

"Well, you do have five kids, so it's not like you have a lot of time to work with him."

I was a little shocked and didn't really know what to say. Why was this person I hardly knew suggesting that I didn't have time to love my son and nurture his development?

Obviously life is busy in a family of seven, but is it so different in a family of three or four? I'm not sure that people with one or two children feel like they're rolling in leisure time, either.

Many parents I know have to juggle working part-time, or even full-time along with the needs of their kids. I don't know how they do that. But they can, and they also manage to raise happy, well-adjusted children.

So I don't see why it's so hard to imagine that the parents of five (or 10 or 15, for that matter) can't do the same. We all have demands on our time.

I know people who grew up in small families who feel their parents were too busy for them, and others who grew up feeling very loved in their big family. What I'm getting at is you can't tell what kind of family someone has just by doing a head count.

That particular conversation is over, and I'm sure that woman never gave a second thought to her offhand comment.

But if I could go back in time, this is what I would say to her:

"I think I know where you're coming from. After all, when we all pile out of our van at the grocery store it reminds you of a clown car.

To you, my family looks like a nameless, faceless horde of children in the parking lot.

But don't assume it looks like that to me.

I know and love each of my children. I pray for them by name. Seeing every one of them achieve their full potential is the most important thing I'll ever do in this lifetime."

I see each one of them so individually that, to be honest, I'm sometimes a little taken aback when I look at a picture of our family all in a group and realize: That is a lot of people!

I don't see a big mass of kids when I look at our family in real life. I just don't.

I may not have time to do elaborate crafts at home or be president of the PTA, but my kids don't care about those things anyway. What matters to them is that I enjoy being with them, that I care to know all about them and that I love them.

And love doesn't work like pie, meaning the more people at the table, the smaller the slice.

I'm not a perfect mom, but I wouldn't be that even if I'd stopped at one or two children either. I'm just a good mom. And I'm enough for my kids.

Every single one of them.

Jenny Evans is a writer, a night owl, a perfectionist, and a Mormon mom of five. When she's not cleaning juice out of the carpet, she makes jokes at her own expense and blogs about her messy life with a houseful of kids at Unremarkable Files.
nextarticle 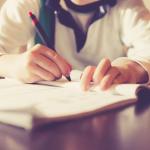 How to Get the Most Out of a…