You Probably Think Your Marriage is Awesome, and 4 Other Things Americans Believe About Family

The Modern Marriage Probably Isn't What You Expect.

The modern marriage probably isn't what you expect.

A new survey done by both the Deseret News and the Center for the Study of Elections and Democracy at BYU looked at how Americans feel about marriage, parenting and their family lives.

The American Family Survey, which surveyed 3,000 people, also looked at how different generations and those from different political ideologies feel about family life and their family experiences, according to the survey's press release.

The survey's goal was to highlight how people feel about marriage and family life and hopefully identify aspects that need to be fixed or aided by family policy, according to the survey's press release.

"These data should make everyone who cares about the family and family policy sit up and take notice - whether they are on the political left, the right or in the center," said Jeremy C. Pope, associate professor of political science at BYU and co-director of the Center for the Study of Elections and Democracy. "Knowing how the public views marriage and family is an important step in diagnosing problems and identifying potential solutions where everyone can agree."

The survey also offered a modern portrait of marriage with some surprising facts. Here are five facts from the survey that you should know if you're married or about to start a family.

You probably think your marriage is better than everyone else's

Americans seem pretty confused about the state of marriage, according to Quartz's Jenny Anderson, since the American Family Survey said that many Americans feel their marriage is in great shape, where as everyone else's is weak.

In fact, respondents seemed to feel their marriages are stronger than they were two years ago, while at the same time they felt the rest of America's marriages were "a train wreck," Anderson wrote.

"Effectively, respondents report relatively high levels of confidence in the strength of their own marriages, but do not extend the same confidence to marriages in general," the report said.

If you're young, there's a reason you're putting off marriage

There's been a lot said in recent years about millennials delaying marriage. And the American Family Survey may have figured out why: Young people are putting off marriage because they want their marriage to be perfect, The Guardian reported.

Specifically, millennials want to accomplish their other life goals, "including cohabitation with a partner, attaining an education and home ownership," before they tie the knot, The Guardian reported.

"I think it's just that they want the marriages to succeed and therefore are willing to wait until the circumstances are a bit better," Richard Reeves, senior fellow in economic studies at the Brookings Institution, told The Guardian.

For millennials, marriage is being regarded as "like the last thing you do. It's the last box you tick, rather than a way of getting to some of the other boxes," according to Reeves.

This is mostly for economic reasons. Millennials want to make sure they are financially well off before they tie the knot so that they can avoid facing any economic issues at the beginning of their marriage, something that can often be a source of conflict between partners, according to The Guardian.

You and everyone else value commitment and marriage " a lot

For many American adults, commitment is more important than marriage, according to the Brookings Institution's analysis of the survey.

In fact, the survey found that 47 percent of respondents felt that commitment is more important than marriage itself, "suggesting that it is commitment represented by marriage that is valued," according to Brookings.

But this doesn't mean that Americans are avoiding marriage altogether. Experts told Deseret News' Lois Collins that marriage is still the goal of all committed relationships.

"I think a lot of people assume marriage has been devalued," Brian Willoughby, assistant professor at BYU, told Collins. "There's nothing that indicates people don't care about marriage any more. If anything, the view is more positive than in the past. It's the ultimate goal for a committed relationship but, on the flip side, there's a paradoxical idea that I might not do that or want that. American culture has made marriage an awesome but optional thing you could do."

Marriage means very different things to people from different ideologies, according to Reeves, who wrote for The Wall Street Journal on the American Family Survey.

Reeves explained that some Americans are split about what marriage means to them and what people feel defines a successful marriage. For example, the survey found that having a stable job, paying off debt and finishing college should all be required before getting involved in marriage.

But, Reeves points out, there's a split in terms of marriage preparation. Liberals felt, for example, that it's more important to cohabitate before marriage.

"The survey's findings suggest that marriage is not on its way out anytime soon. Strong support for the institution can be found across generations, classes, and races," Reeves wrote. "But it is also clear that people are thinking of marriage in very different ways, so much so that it must almost be seen as a different institution, depending on who is choosing it. Rather than seeing marriage as a singular institution, we might need to start thinking of an increasing plurality of American marriages."

Liberals and conservatives may have different views on a lot of American family and marriage values, but they can agree on one thing - discipline.

As Deseret News' Lois Collins pointed out in her report on the survey, "parents not disciplining kids enough is the most commonly cited issue facing families" among both conservatives and liberals. In fact, 53 percent of respondents said teaching and disciplining children is the biggest issue families face today.

Some respondents said that children didn't face enough discipline for all the media they consume - something that "wasn't even on the radar" a generation ago, according to Andrew Cherlin, a sociology professor at Johns Hopkins University, who spoke with Collins about the study.

Survey participants were also worried about physical punishments, according to the survey. Cherlin was surprised to see that most respondents said it was necessary to give their children a "hard spanking" at times.

After all, Cherlin said there were more wholesome ways for parents to teach their children about wrongdoings.

Cherlin said most experts "think kids thrive with encouragement, love and modest discipline. It's the 'modest' that seems to not come through here. I would think that 'good hard spanking' would be much lower. Last year, we saw an NFL player suspended for the season because he gave his child a good, hard switch."

Like generations before, modern married couples plan to work on fixing these discipline issues together, the survey said.

Most Americans think their own marriage is better than others, Deseret News-BYU survey finds
Liberals and conservatives disagree about marriage, but have similar family lives, survey finds
Where grandparents, parents and kids agree - and disagree - on family life
What influences your opinions on immigration, welfare and divorce 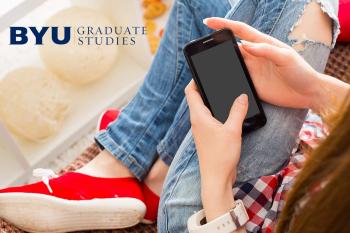 5 Reasons You Should Stop and Think Before…