Young parents, these really are the best years

Despite the stress, fatigue and frustration, your child-rearing years really are the best years of your life.

Editor's note: This article was previously published by the Gwinnett Daily Post. It has been reprinted here with permission.

The other day, I stopped by the home of a young couple from church. Their three little boys, all under age 8, were playing in the front yard under mom's watchful eye.

And by "playing," of course, I mean waging tacit warfare against each other, occasional passers-by (including me), and any inanimate object within reach. Their weapon of choice appeared to have once been a soccer ball.

As I approached the house, the mother looked at me, fatigue etched on her face, and said, "Don't you miss this?"

I think my answer surprised her. "Yes, I do," I said. "Every day. If I could go back and do it all over again, I would in a heartbeat."

I say that as a father of four - three of whom are grown and living on their own. The fourth is in high school, which is to say he's grown and still living off me and my wife. But that's OK. I dread the day he leaves, too, not because I'm not looking forward to having my wife to myself occasionally - I am, indeed - but because it will mean my child-rearing years are officially over.

I know all you young parents think you're stressed to the max. I remember feeling that way too. You look forward every day to some magical time in the future when the kids will be older and life will be easier.

Sorry. It doesn't work that way. As your children get older and you get older, your stress simply becomes magnified. With each passing year, things get more expensive, your schedule becomes more hectic and time to yourself grows ever scarcer.

So enjoy these days when your little ones are trying to kill each other in the front yard. Believe it or not, they're relatively carefree.

Do you sometimes feel like your life is spinning out of control? All young parents do. But the truth is, when your kids are young, you actually have more control over events than you will when they're older.

After all, with little kids, you generally know where they are and what they're doing. You determine when they go to bed, what they wear, what they eat. Not so much with teenagers. And just wait until they're adults, and you have no control over their lives whatsoever beyond your nightly fervent prayers.

All conscientious parents worry constantly if they're doing a good job. Well, don't sweat it. You're not. Nobody is. We all just do the best we can and put the rest in the Lord's hands.

But when your kids are little, at least, you can feel like you're not such a bad parent because your children are constantly telling you how wonderful you are. Not always in words, perhaps, but certainly by their actions. Think a teenager is going to come up and put her arms around your neck after you've lost your temper and yelled at her?

Besides that, little children count on us for virtually everything, right down to the food they eat. Simply seeing them fed, clothed and sheltered is a satisfaction not to be taken lightly.

When you're a teenager or college student, it's natural to wonder just what you're supposed to do with your life. Oddly, that feeling has a sneaky tendency to return in your 50s. We call it a mid-life crisis.

But when you're in your 20s or 30s, with two or more small children, there's no need to wonder. Your primary mission in life, for 20 years or so, is to care for your children - provide for them, clean up after them, get them where they need to be and make sure they don't actually kill themselves or each other. If that's not a sense of purpose, I don't know what is.

Above all, raising kids is fun. I know it often doesn't seem that way now, but just wait until you're on my end, looking back. Then you'll realize just how much fun you had as a young family - going to the park, taking long trips together, playing "Clean the Poo Off the Wall."

Believe me, when that's all over, you'll miss it. It will leave a little hole in your heart that nothing else can fill - until grandkids come along, at least. Now that's something to look forward to. But even as a grandparent, you'll still miss the days when those little ones were your own.

So, don't wish your life away, and your kids' lives away, waiting for your children to grow up. Trust me, they will - and all too soon. And then you'll wish you could go back and do it all over again. 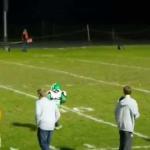 The Greatest Football Play You Will Ever Watch