Gaining the Most Out of Life at Every Age Takes a Little Dreaming and a Fair Measure of Courage. Here Are Five Suggestions to Help You Enjoy Life to Its Fullest.

Life is an exciting journey. As age increases, perspective changes. For some, as they get older their vision narrows and they become very cautious, thinking their opportunities are getting more and more limited. If they have had some failures, their caution grows. Others keep their mind alive to new possibilities and their vision of the future broad, scanning the horizon for things to do and places to go. They are willing to take a chance on a new dream or another goal.

published his epic book, Roget's Thesaurus, at age 73 and continued to work on it until he died at age 90.

, after working for the government for many years went to a French cooking school and with two classmates published in 1961, at age 50, what is still considered one of the most important cookbooks of all time. It launched her career as the first great TV chef. She retired at age 90.

struggled in school and failed the sixth grade. After his schooling he had many years of political failures, being defeated in every election until he was elected Prime Minister of the United Kingdom at age 62. He was elected twice and won a Nobel Prize.

became a columnist in her 40s and published her first novel in the "Little House" series of children's books in her 60s.

who was first an actor, union leader and corporate spokesman, was elected to public office at age 55 as Governor of California and remains the oldest man to have served as U.S. President.

, after a divorce at age 52, bought an English bulldog, Zelda. She took a picture of the dog in a bubble bath wearing a Santa Claus hat and bubble beard. It won a contest at a local pet store and launched a product line of greeting cards, figurines and other products. Her company is reported to have revenues of over $50 million.

The list could go on and on of many people at various ages who have started with a new dream, but you get the picture. So, what can you do in your life to give you a chance to open a dream?

1. Live your life now to its fullest

Recognize, look for and build the exciting parts of your current life. You don't have to have big expensive things to find pleasure and enjoyment in what is around you. Enjoy the simple things of life. We can learn from the 6-year-old boy, who, with a sparkle in his eyes and wonder in his voice, said, "Look, Mommy, a puddle!" You can only imagine what a child can do with a puddle. A mind that finds excitement in the ordinary and is willing to try something new is fertile ground for new dreams to grow.

2. Allow yourself to dream

Dreaming doesn't cost a thing. It often allows you to see new potentials and can lead to new opportunities. Look at the vast variety of products available, many of which came because someone dreamed up a way to solve a problem. Who would have thought a simple picture of a dog could launch a multi-million dollar company. Only one who allowed herself to dream.

3. Surround yourself with positive uplifting people

First, if you are married, be the kind of mate you would want your mate to be. Mates have the greatest effect on each other to help each realize dreams and in building a good future. Next, choose good friends with whom you help each other be the best you can be. Friends are different than acquaintances, you will have many acquaintances and few true friends, the best of which needs to be your mate.

4. Be the best employee or boss you can be

This is an extension of point one. You have chosen the job so build pride in your labors and confidence in your abilities.

There needs to be a balance between home, work and play. Each of these must leave you with a peaceful feeling and a desire to continue on your journey of life.

Many aspects of our lives are beyond our control and present challenges we must face; however, it is we who choose what we do during these challenging times. There are parts of our life that we have control over and the above five areas are personal choices. All of these combine to nourish the mind and spirit which allows us to see new goals and have new dreams. There are some who grow old at a young age because their mind and spirit grow weary and burdened. This is a choice.

No matter what your age, take some time to look at the above five suggestions and evaluate your own choices to see where you can renew the nourishment of your mind and spirit. Look for the little steps to help lift and gain an excitement for life and see if your dreams become a reality. 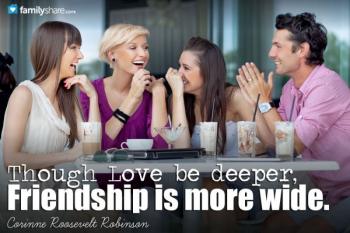 Keeping Your Opposite-Sex Friends After You Say "I…