The History of Mother’s Day

Mother’s Day is about highlighting and celebrating all of the hardworking selfless women who take care of their children.

According to the National Retail Federation’s latest statistics, Mother’s Day spending tops at $25 billion each year in the United States. The average American spends an average of $196. Mother’s Day is not about the overpriced flowers, fancy chocolates, or ridiculous spa days – it is actually about highlighting and celebrating all of the hardworking selfless women who take care of their children.

Thanks to Anna Jarvis, daughter of Ann Reeves Jarvis, Mother’s Day became a recognized holiday; however, it was not without a whole lot of hard work and perseverance. With most holidays recognizing men, Anna wanted to create a holiday that highlighted women. Following her mother’s death in 1905, Anna was inspired to create Mother’s Day – a way of honoring the sacrifices mothers make for their children.

The first Mother’s Day was organized and celebrated in May 1908 at a Methodist church in Grafton, West Virginia. On this day, a Philadelphia department store owner named John Wanamaker decided to financially back Mother’s Day and thousands of people responded by attending an event at his retail stores.

Anna wrote a ton of letters to newspapers and well-known politicians, hoping that they would rally behind her and support a nationally celebrated Mother’s Day. After several years of hitting the pavement, it worked. By 1912 many states, towns and churches adopted Mother’s Day as an annual holiday and the Mother’s Day International Association was established for the cause.

What many people probably don’t know is that Anna remained unmarried and childless her whole life. Her inspiration to create Mother’s Day was really influenced by her personal love for her own mother and the desire to have other mothers recognized. She saw how hard mothers worked and how they impacted the world.

To Anna’s dismay, Mother’s Day ended up snowballing into a commercialized holiday that has now become a “cash cow” for retailers. Anna’s version of the special day involved wearing a white carnation as a badge, spending quality time with a mother, and attending church services. She wanted to focus on experience over materialism.

Initially, Anna worked with the floral industry to raise the holiday’s profile. She didn’t expect the industry to transform into a commercialized monopoly and denounce the foundation of Mother’s Day. Sadly, due to the commercialized corruption, Anna spent the later years of her life campaigning against the holiday she worked so hard to establish. When she died in 1948, she disowned the holiday altogether and lobbied for the government to remove it from the calendar. She was disgusted by the lavish gifts and gestures.

Despite its retail ties, Mother’s Day has become a launching pad for feminist causes and equal rights. Coretta Scott King used Mother’s Day, in 1968, to host a march in support of underprivileged women and children. In the 1970s, women’s groups rallied together to fight for equal rights and fair access to childcare. As the years have progressed, celebrating Mother’s Day has continued with a sense of feminist solidarity.

Even though Mother’s Day has become a commercialized holiday, there is no denying that the holiday has created recognition for women across the world. It is really up to people like you, the reader, to do what you will with this history lesson. You can either continue to feed the retail industry and buy more stuff, or you can pay appreciation to your mother with quality time, words from the heart, and a kind gesture. You make the choice and write the future. 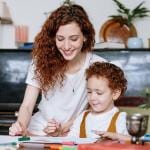 What Does 'on the Spectrum' Really Mean?