10 chick flicks your man will actually watch with you

You may be asking: Who are you to write an article about what chick flicks men like? Aren't you a woman? Don't you only have sisters? And isn't your father a fan of all chick flicks?

Thank you for asking those strangely well-informed questions.

And yes, those all are true.

However, these two things are also true.

First of all, I'm very well-read on the chick flick movie scene so there's no questioning my expertise in the land of romantic comedies.

Second, believe it or not, I do know a few fellas. I've even coerced some of them to watch sappy, romantic movies. Also, in preparation for this article, I conducted a highly scientific (that may be stretching it) facebook survey, as well as asked men directly for their input. So this information comes directly from authoritative sources.

As one of the few romantic comedies told from the guy's perspective, 'Hitch' is a great go-to for a chick flick the both of you will love.

For the guys: Action-star Will Smith teaching men everywhere how to rock at dating.

A borderline anti-chick flick, this artsy movie told non-linearly is a favorite of many men.

For the gals: a full-blown dance number.

For the guys: rom-com reality check.

This easily quotable classic has pretty much everything you want from a chick flick with all the excitement of an action movie.

For the gals: "a kissing book."

For the guys: pirates, monsters, sword-fighting.

For any guy who knows a girl obsessed with Jane Austen, this movie is a great pick. It's too much a parody of Regency romance to take itself seriously.

For the gals: period romance.

For the guys: a hilarious spoof of everything Austen.

Another chick flick that is from a man's perspective instead of a woman's, 'Dan in Real Life' is a movie about a single father who falls in love with his brother's girl.

For the gals: guitar playing hotness.

For the guys: Steve Carrell nailing the comedy.

While You Were Sleeping

Because this early Sandra Bullock movie is about a family who mistakenly believes their comatose son is engaged to the woman who saved his life, there's more of a focus on the comedy than the romance.

For the gals: lots of "leaning".

For the guys: a goofy family.

If you're man is a fan of Sandler-esque comedy, the fact that this one is romantic won't deter him.

For the gals: he has to woo her all over again every day (how cute is that?).

For the guys: an Adam Sandler comedy.

I'm sorry, this movie is just plain hilarious. If your man can't see that, who is he?

For the gals: Ryan Reynolds.

For the guys: Sandra Bullock.

I'm not absolutely sure what the male (or 'mail') appeal is here but I guess guys just have good taste because you can't go wrong with this 'Shop Around the Corner' modernization.

For the gals: Meg Ryan and Tom Hanks at their best.

For the guys: Godfather references.

A Walk to Remember

I was definitely reluctant to include this one on the list. I mean, it's got all the cheese of nachos and all the sappiness of maple syrup. But the men have spoken, and for some reason, they like this one.

For the gals: Kleenex worthy.

For the guys: who knows? 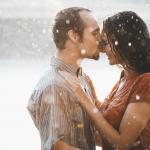 11 Things That Have More Significance Than "I…