Proven to Get a Guy to Approach You Within 15 Seconds.

My grandmother gave me my first set of makeup when I was seven.

The set was a tube of dried-up mascara, some goopy eyeliner, and a nearly empty lip stick, but I put the makeup on and eagerly accompanied my grandma to the grocery store to show off my new look.

As we parked, she said to me, "I think it's about time you think about getting a boyfriend."

Yes, she was certifiably crazy, but grandmas have a sixth sense when it comes to their progeny's social life.

Or lack of one.

She seemed to know even then that I would need 15 years of coaching before I would kick my romantic life into gear.

But as a teenager, I thought her tips were ridiculous. Tilt my head when I talk to a guy? Lick my lips? Seriously?

It all seemed so artificial to me. Turns out my grandma was right.

One of the most fascinating studies on flirting was completed by Monica M. Moore; she studied what behaviors get a man's (positive) attention within 15 seconds.

Moore had two incognito observers observe a woman for a half hour. When the woman exhibited a nonverbal behavior that resulted in a man approaching her, "talking to her, leaning towards her, asking her to dance, touching her, or kissing her" within 15 seconds of her behavior, the observers took note.

The researchers observed 200 women and catalogued 52 behaviors that got the man to up the ante within 15 seconds.

And my grandma's advice to tilt my head and lick my lips? They both made the list!

Here are 11 of the 52 behaviors that got the attention of a man within 15 seconds:

The woman takes five to 10 seconds to look over the room. She's not making direct eye contact with anybody. She's just checking things out. Sometimes the woman stands up so she can get a better look.

The woman looks directly at a man and then quickly looks away. She looks at the man again and looks away again. On average, she does this three times and the length of the glances are less than three seconds long.

The woman looks at a man for more than three seconds. This approach may seem bold but research by James Douglas Laird shows that sustained eye contact for two minutes increases feelings of affection and attraction.

The hair flip involves the woman "pushing her fingers through her hair" or running her hand over her hair. Some women would touch their hair several times within 30 seconds.

5. Nodding the head, presumably in agreement

Nodding the head was less common, but it can be really powerful. Researchershave found that a head nod encourages a man to talk more.

This is better than truth serum. You keep nodding your head, and you might learn that he wants his future wife to cook meatloaf like his mother. He might even reveal his obsession with Teenage Mutant Ninja Turtles. All good things to know.

This was my grandmother's favorite! This is where the woman tilts her head sideways at a 45 degree angle. Sometimes she even strokes her neck. Wowsers!

While it may sound tacky, there were 48 lip lick displays among the 200 women. One woman even made eye contact with a man and then slowly put on her lipstick. She took 15 seconds to apply it, circling her lips over and over again.

But given that lipstick application made it on the list of the 52 behaviors, and she was the only one who applied lipstick in front of a man, we can only presume that the man approached her within 15 seconds.

Consider this approach for especially clueless guys. Keep an entire collection of fruit-flavored glosses in your purse. While you're nodding your head, implicitly agreeing that Michelangelo is the baddest Teenage Mutant Ninja Turtle ever, you quietly interrupt his monologue with "What's your favorite fruit?" When he mentions raspberries, pull your raspberry flavored lip gloss out of your purse and take forever to put it on your lips. If he's too dense for that, then really, you should just move on.

Moore found that more women used direct eye contact and a full smile instead of the coy smile.

Studies confirm that men are most attracted to women that smile. In one study involving over 1000 people, men found smiling women more attractive than other women. Another study confirms that "attraction is strongly influenced by the intensity of a smile expressed on a face."

The woman usually laughs in response to something someone said. Often the woman tosses her head before she laughs. Apparently guys like it.

The results of the second part of Moore's study were even more astonishing. Another 40 women were observed for an hour each and were then classified into two groups. This is what the researchers found:

On average, they were approached over four times in one hour.

On average, they were approached less than .48 times in one hour.

Becky Blackburn Griffin writes about dating and relationships. She's compiled top research into an entertaining guide called "Get Out of the Friend Zone." It's available at her website, "A Quality Girl."
nextarticle 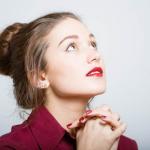 7 Simple Ways to Invite Jesus into Your…