10 Rules For Fighting Unfairly in Your Relationship

We Know How Tough It Can Be to Win an Argument With Your Loved One. Here Are a Few Tips to Give You the Edge at All Costs. Never Mind Whether They'll Likely Ruin Your Relationship

"Fight fair"-that's what pretty much every advice giver will tell you. But let me ask you this: Is it better to win the argument, or to walk away knowing that you conducted yourself with the utmost integrity?

Deep down, I think you instinctively know what a true American icon, Vince Lombardi, had the audacity to verbalize: "Winning isn't everything; it's the only thing."

To that end, I've come up with ten rules to give you the edge at all costs, even if it means destroying your relationship and ruining your reputation...

...or, if you have any integrity whatsoever, you can view the following as 10 things not to do if you wish to maintain a healthy relationship and feel good about yourself.

1. Be louder than your sweetheart

Sheer volume is key to winning a misunderstanding with your loved one, especially if you know darned well that they're right and you're wrong. How can they possibly get their point across if they can't even be heard? Your lover may call it yelling; however, convince yourself that raising your voice to resolve conflict is no more than motivational speaking for the selective hearing.

You do not want to be caught accidentally listening. Add a cup of "argumentus interruptus" in your next verbal battle for an extra edge that spells w-i-n-n-i-n-g!

3. Always remember that "wrong" is a four-letter word

(Hey, I never said I was good at math...) Of course, I'm referring to the phrase, "I was wrong," which should never be heard coming from your lips in the presence of the love of your life. Once you start admitting guilt or fault, the next thing you know, you'll feel compelled to start making interpersonal improvements (yuck) to yourself. Who needs that kind of hassle?

If you allow yourself to utter the words, "I'm sorry," during an argument with your spouse, you might as well wave the white flag of surrender. As far as you're concerned, apology equals defeat, and letting your cutie win is not an option! The only exception to this rule is if you're using the word "sorry" like this: "I'm sorry you're not capable enough to understand that your wrong." Your partner may immediately see that you're right and will likely settle right down. Try it, what's the worst that could happen?

And of course, that "who" is always you! The objective of an argument with your honey bear is not to resolve the issue, but to prove that you are superior. Sure, this approach will leave you lonely and desperate for affection, but hey, at least you'll know who's right. This will surely help you sleep better at night.

6. Name-calling is absolutely essential if you're going to master the art of unfair fighting.

Be sure to use the most ridiculous and immature names you can think of. Attack the person, not the argument! No need to get flustered if they come up with a well-reasoned concern...hit below the belt and crown yourself victor!

7. Turn a losing argument into a winning one - or at least a different one - with irrelevant comments.

Deflect and redirect for guaranteed success in your next debate with such brilliantly incongruous salvos as, "If you're so wonderful, why do I have to do everything?" and "Oh yeah, well, why is it that root beer isn't really beer and doesn't come from a root?" Remember, when arguing with a loved one, if you're off topic, you're off to a good start.

8. Dig up things she said in the past

The deeper in the past, the better. Use them as verbal ammunition against your sweetie. Did they say something slightly inaccurate ten years ago? Great! Remind her of it during an argument, at least half a dozen times. After all, youthful misstatements must never be forgiven if you're going to win this fight!

9. Take things out of context as often as possible

Let's say, for example, that your loved one once uttered, "I've played on dozens of co-ed softball teams, and I've been with a lot of men who I could pitch, catch, or run as well as they could." Your merciless mind should immediately focus like a laser on the phrase, "I've been with a lot of men." Do you see where I'm going with this? Right or wrong, in context or out, it doesn't matter; anything they say can, and will, be used against them!

...and it will, if you're actually following the advice in this list-you can always throw up your hands, roll your eyes, and proclaim, "I can't force you to be right!" and then proceed to walk out of the room.

So there you have it, ten rules for waging a verbal war without being bogged down by such unimportant things as fairness, respect, decency or intelligence. Try some or even all of these ingenious suggestions for a swift one-way ticket to the doghouse and a prime opportunity to sleep on the couch instead of the bed. If you strictly follow these rules your relationship will end faster than a baby seal's life during Shark Week. But hey, isn't that what winning is all about?

Dr. Jared Cooper graduated with is Doctorate in Optometry from the Southern College of Optometry in 2009. He sees patients at various locations throughout Utah and Idaho.
nextarticle 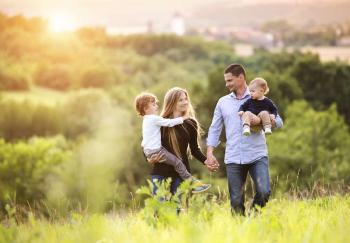 10 Parenting Tips That Can Instantly Impact Your…