10 things nobody told you about being married

People Have Told You Marriage is Fun But Also Hard - Worthwhile But Also Challenging. It's Also a Lot of Other Things People Don't Tell You. Here Are a Few More Things You Should Know.

You've heard that marriage isn't easy, that there are going to be trials, surprises and changes of plans along the way. People also tell you it's a blast and the best decision they've ever made. But did anyone tell you being married is also awkward? And sweaty? Being married is a lot of things, some of which no one tells you about ahead of time. Here's a head's up of a few things you probably haven't heard before.

It's going to feel awkward, at first

Getting married is an odd situation because while you love this person very much, you realize when you move in together there's a lot you didn't know about each other. Like, did you know he likes clipping his toenails into the sink? Are you supposed to be comfortable being seen in your underwear right away? Not necessarily. Help mitigate this awkwardness by talking about it (tell him if you'd rather he keep the bathroom door closed, at least) and laugh about it.

You sweat when you cuddle

When you were dating, you probably couldn't get enough of cuddling. When you're married, you get to do all the cuddling you want, and you may find it isn't as fun as it used to be. Cuddling in bed is certainly nice at first, but you'd like your own space to sprawl out and turn over, as well. It doesn't mean you're falling out of love to want these things. It just means you're finding a good balance in your new life.

There is not enough room in the shower ...

for all the shampoos, conditioners, soaps, and razors. In my experience, bathrooms never have enough cupboard space, and showers can be especially cramped. Consider sharing the same shampoo brands so you don't have to constantly buy duplicates. Apply this principle to other areas of the house to cut down on clutter.

Cooking for two is hard

You'd think cooking for two would be easy, what with less food to purchase and fewer opinions to poll. However, you'll soon find that most recipes aren't written for two people and making the same few dishes over and over gets old fast. Stock up on recipes for favorite dishes from both your home and your spouse's and get creative with ways of using your leftovers.

You're just as likely to have too much as too little

When my husband and I got married, our problem wasn't having too little furniture, it was having too much. We were given couches and chairs and end tables galore until we had to turn the second bedroom in our apartment into a storage room. This clutter also made for some of our first arguments over what to keep and what to donate. Prevent this from happening to you by keeping good track of what you're given and politely declining what you really don't need.

You might worry that moving into a small apartment after living in a larger house with your family or townhome with roommates will be crowded, but remember that there will only be two of you living there, and you'll be fairly partial to your new permanent roommate. Apartments feel as cozy or as crowded as you make them, so don't stress about square footage and figure out instead what can fit into your budget.

Old friends still matter, just not as much

Being married changes more than just your relationship status. It will also change how you relate with all your other friends, single or married. Of course, it's fine to keep in touch and spend time with old friends. You'll have to make sure it isn't at the expense of your spouse, and you may have to say good-bye altogether to close friendships with members of the opposite sex. It's just safer and easier that way. Your spouse should be your main confidante and shoulder to cry on, and you should be his.

You need to pay the bills

In the midst of newly-married bliss, don't forget that you have a lot of financial responsibilities, as well. For some couples, their first arguments are about how and what to spend their money on. Instead of feeling overwhelmed and frustrated, try to see the humor in the situation and leave your parents out of it. These decisions need to be made by you two as a couple.

You need some alone time

Just because you're married doesn't mean you have to spend every free waking moment together. It's important to pursue your own interests as well. Set aside time to spend on your own hobbies, and you'll find you're even happier to see your spouse when you come together, again.

The honeymoon phase can last as long as you want

People will ask you how long you've been married and wink knowingly when you answer it's only been a few weeks or months. Then they'll warn, "The honeymoon phase doesn't last forever. Enjoy it while you can." The truth is, you can make this "phase" last as long as you want. As long as you listen to one another, maintain your courtship by dating, you can always feel crazy in love with each other. And, over time, your love will just get stronger.

Being married is fun and exciting and stressful and different and it'll take time to get used to all the changes it brings to your life. It's OK if everything doesn't run perfectly at first. That's the fun part - learning and growing and progressing together, and looking forward to a lifetime of sharing and loving. Here are 4 other thoughts that will change your marriage. 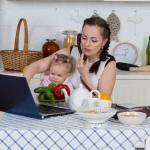 What a Stay-At-Home Mom Really Does