10 ways you are unintentionally keeping yourself from happiness

Wonder Why You Don't Feel More Cheerful? It Could Be You're Sabotaging Your Own Happiness by Doing One of These 10 Common Things.

Does it ever feel like you're constantly in the "pursuit" of happiness without ever actually feeling happy?

Even in the midst of life's trials it's possible to feel happy, but you have to be intentional about it. Test yourself on these 10 common behaviors that might be keeping you from feeling really happy. If you've accidentally made a habit of any of them, make a commitment today to change. You'll soon find happiness is less of a reward for good behavior and more of a choice you make every day.

Not getting enough sleep

If you're not catching enough Z's, you're probably not only tired all the time, you're also less happy. Time Magazine cited a sleep study quoted in Po Bronson and Ashley Merryman's book "NurtureShock," which found that "sleep deprivation hits the hippocampus harder than the amygdala. The result is that sleep-deprived people fail to recall pleasant memories, yet recall gloomy memories just fine."

To illustrate this, they described an experiment in which college students getting too little sleep were asked to memorize a list of words. "They could remember 81 percent of the words with a negative connotation, like 'cancer,'" Bronson and Merryman said. "But they could remember only 31 percent of the words with a positive or neutral connotation, like 'sunshine' or 'basket.'"

Letting yourself get too hungry

It's funny that something as simple as hunger could affect our happiness so profoundly, but it's one of those basic needs that must be met in order for you to function effectively. Simple things like skipping breakfast, stress eating and snacking on junk food affect your health, which in turn affect your ability to feel content. So the next time you find you just can't feel happy, check your diet, then go from there.

Spending too little time with family and friends

Money isn't everything, at least according to an article published in the Journal of Socio-Economics. Using the British Household Panel Survey, researchers found "that an increase in the level of social involvements is worth up to an extra £85,000 (about $131,232 USD) a year in terms of life satisfaction. Actual changes in income, on the other hand, buy very little happiness."

So don't forget to prioritize your social interactions in conjunction with career and education aspirations. Otherwise, you may not find the happiness and satisfaction you've been looking for.

Being unwilling to 'fake it'

You've heard about "fake it until you make it," but have you ever actually tried it? It might feel contradictory that putting on a false smile and trying to be positive when you feel your most negative should make a difference, but it does. After a while, if you're really trying to "fake it," you'll forget the effort is fake and your happiness will become real. You'll be focusing on all the positive things, trying to make your smile more sincere, and suddenly, it will be. Try it the next time you're having a down day.

Nagging your significant other

If you have a bad habit of nagging, it could be time to check yourself before you speak and try to cut back. Realsimple.com blogger Gretchen Rubin conducted a year-long "Happiness Project" trying out all the happiness advice given by experts. One strategy she found especially effective was to stop nagging her husband so much.

"I got a surprisingly big happiness boost from quitting nagging," Gretchen said. "I hadn't realized how shrewish and angry I had felt as a result of speaking like that." Instead of constantly reminding her husband of everything she wanted him to do, she used wordless hints or short phrases so she wouldn't be tempted to talk on and on or else she did the task herself if it was quick or within her ability to do so.

Thinking too much about yourself

You might have noticed that the times you feel the most miserable are the times when you're focusing the most on yourself. Anyone can get depressed thinking too hard about all the trials and stresses in his or her life (and we all have more than enough to wear down the most cheerful of dispositions).

The solution is all about a change of perspective. Try to stop thinking so much about what's going wrong in your life and instead figure out what you can do to serve someone who is also having a rough time. Your service won't just brighten their day, it will release you from your own thought prison that was keeping your happiness at bay.

Commuting too far for work

Anyone with a long work commute knows of the misery that driving during rush hour can inflict. And yet in order to build a new house or get more home for their buck, homeowners will often submit to a longer commute in order to get the house they want.

In the long run, however, the pleasure of a larger or nicer house might be outweighed by the negative weight of the commute. Artofmanliness.com explains, "Commuting is simply unpleasant; it lessens your time with your family, costs money and stresses you out. And not only is it unpleasant for the commuter, it diminishes the happiness of his partner as well."

And it isn't the kind of stress you can ever get used to because it's different every day, unlike other types of unpleasantness which you can simply acclimate to. So weigh your options carefully when trading a longer commute for more square footage.

Relying too much on your own strength

Have you ever noticed that in comic books and movies, superheroes never work entirely alone? If they try, they inevitably meet their downfall and must be rescued by some sidekick or citizen or other. Whether you're a superhero or not (and we are all the superheroes of our own lives), you can't expect to solve every one of life's problems yourself.

When you feel overwhelmed, don't feel ashamed to turn to others for assistance. There will always be friends, family members and sometimes complete strangers who will be willing to help you out. Belief in a higher power is also often comforting and uplifting to those for whom earthly help has failed. Turning to God is never a sign of weakness; it's a sign of strength - you realize your own limitations and have the maturity to ask for help from the one being who is always there to serve and heal you.

Stop waiting for that big raise, the promotion or the relationship that you think is going to finally make you happy. Happiness isn't some goal you attain sometime in the future, it's a choice you make each day of your life. You don't have to hope you'll be happy "someday," you can be happy whenever you want. Don't wait for someone else's permission, a due date or a finish line. Be happy now, because that's what life is all about.

Being unwilling to forgive

Have you ever nursed a grievance against someone who has wronged you? It's like keeping an open wound. If you bandage a cut and then leave it alone, over time it will heal. But if you are constantly picking at it, it might become sore, infected and eventually leave a more prominent scar than it would have in the first place.

That's what it's like when you don't extend forgiveness to others; you don't allow your hurt to heal and it starts to eat at you, affecting you negatively even when you're at your happiest. Even holding on to small things - like a neighbor who never cleans up after his dog visits your front lawn, or a relative who persistently pokes her nose into your business - can weigh you down. Another thing about resentment: It only hurts you. It doesn't hurt the person you haven't

Don't allow someone else's actions to dictate the conditions of your happiness. Forgive as quickly as you can, and move on.

For an inspiring story about the power of love and forgiveness, watch "Just Let Go". Now available for purchase on DVD and Blu-ray. 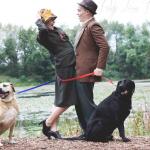