13 questions that COULD have saved divorcees from horrible marriages

And It Could Save You From Misery Too.

Blaring divorce rates can make marriage seem terrifying, but happy marriages do exist (and are more common than you think!).

A fearful soon-to-be-married reddit user asked divorced individuals what they wish they had discussed before marrying their ex. Hundreds pitched in (including some who have been in longtime happy marriages). Here are some of the best words of advice:

1. What do we do when our parents get old and require care?

"Life happens and you won't always be ready for it. Just be open with each other and be willing to work together and you can get through any of these things."

2. Why am I getting married?

"I wish I'd asked myself why I want to get married. I might've discovered that I wanted to get married to be married not because I'd found someone to bind myself to for the rest of my life."

3. What do we have in our relationship besides love?

"Sometimes I think we watch too many romantic comedies, so we believe that 'love will conquer all.' It doesn't. It's 100% necessary, but you also need trust, honesty, respect, and understanding/forgiveness. Think of it like a table. If you have all 4 legs, the table can sustain significant burden. If you only have 3 it can stand up on its own, but it's unstable and will collapse under any sort of weight. If you have fewer than 2, then it's not a functioning table at all ... your marriage will periodically have to stand up to hardship (family deaths, job loss, children, depression/illness, etc.) over time. But, if you have all 4 of the above, you can not only survive those things, but thrive in them." - Bassoline

4. Where do you want us to be in five years?

"While it is great to discuss these things now, just be aware that your circumstances at the time will dictate what you actually do if or when any of these come to pass." - ReBurnInator

"I wish I had known the true extent of my mother-in-law's craziness. Not that it necessarily would have kept me from marrying my husband, but I might have taken a little pause ... It's a hundred times worse (which seemed impossible) now that we have a child." - Veggiesaur

6. What do we do if we have an accidental pregnancy?

"If we have never discussed 'What to do in case of accidental pregnancy,' and my gut response is 'Abortion if the timing isn't right,' and his is 'You will burn in hell for murdering my child,' then it's probably good we got that out in the open now." - Ameliorates

7. Who's side will you take if your family and I have a disagreement?

"[My] husband's brother and his wife and his sister love to hate me. [It's] enormously painful for me, and my husband has never stuck up for me." - Danae-rain

8. Are there red flags I'm ignoring?

"I wish I hadn't ignored the red flags, which in my opinion, become harder and harder to do the closer you get to the wedding. Once you announce your engagement, your mindset turns more to the excitement of the wedding, and you tend to turn a blind eye to any warning signs that it might not work out. And the thought of canceling the wedding can be enough to make anyone convince himself or herself that they can make it work. But trust me, divorce is harder than calling off a wedding.

"In hindsight, things were so obviously bound to fail. He was steadily becoming more and more dependent on alcohol, had a lot of unresolved childhood issues, etc. Things that I thought we would just work through because that's what you do in a marriage. Except when the other person refuses to work through them." - flippityfloppity

9. Why do some couples get divorced?

"My husband and I are still together and are very happy, but before we got engaged we talked about some really difficult things ... We even talked about the possibility of divorce. We didn't get married thinking that it was going to happen, but we both wanted to acknowledge that it's always an eventual possibility.

"Since we don't want that to happen, we keep that in mind and when the inevitable distance between two people happens (and it will always happen at multiple points), we consciously take care of that before it becomes a big space.

"I get wrapped up in school and work and start to take him for granted. Because I know that this behavior will eventually lead to problems in our marriage, I have the ability to see it and make changes. If he notices before I do, he can say something. Acknowledging that there are things we can do that will cause our marriage to end allows us to find the cancer before it takes over everything." - Kornberg

"Don't get married if you feel like you would be unhappy if things stayed like they are now for the rest of your life. Your guy is going to marry you because he likes the way things are right now and wants it to continue. He is not marrying you because he wants things to change." - Fetish Goth

11. What happens if we fall out of love?

"Do you BOTH have the same idea of how much work should be put into the marriage? Ask yourselves at what point would you throw in the towel if one or both of you 'fell out of love.' If he says 'As soon as I feel I don't love you anymore,' and you say 'After working hard together to try and save the marriage,' then that is a red flag; the one who wants to work the least is ALWAYS the limiting factor in that case.

"How can you work anything out when the other person has given up? You really cannot. Had I realized then that he didn't view marriage as seriously as I had, that he wouldn't be willing to work, that 'for better or for worse' meant one thing to me and another thing to him, I WOULD NOT have married him and put an innocent child through this." - Happy Fun Ballll

12. How will we raise our children?

Questions about parenting shouldn't only include how many you want. Education (homeschool, private or public), religion (what religion will you raise them in and how much will it impact how you raise them) and basic child rearing philosophies (time outs, spankings, groundings, sleepovers) need to be discussed.

Happy marriages are possible. As one contributor said, "Marriage takes hard work and sacrifice from both partners to be successful. You won't always see eye to eye, and that's ok, but don't hold grudges... Most problems aren't as big as we make them out to be." 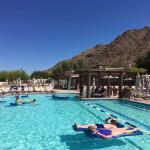 A Heat Wave is Coming to a City…