These 14 Facts About Kissing Are Going to Surprise You.

You might think you know your way around a great kiss, but you probably don't know these 14 awesome facts about kissing.

1. You transfer 80 million bacteria in 10 seconds

In just a ten second kiss, the bacteria cultures in your mouth drastically change. You transfer 80 million microbes between the two of you. While it may sound gross, there's really no problem with transferring bacteria. In fact, your partner may have some microbes that will be helpful to your mouth's community.

If you think kissing is just about your lips and tongue, think again. Apparently kissing involves 146 muscles, 34 in your face, as well as 112 postural muscles.

3. Many cultures think it's gross

In a study of 168 cultures, scientists discovered that only 77 (or 46%) actually kiss as a romantic gesture. In fact, many other cultures don't understand the practice and think kissing is "gross."

The face of a boy who just got his first real kiss and absolutely does NOT think Drisella is an "ugly" stepsister ? ? Swipe left to see Patrick and his new GF rocking the Cinderella dinner at the #grandfloridian ?#makeoutsession #disneykid #disneyworld #cinderella #uglystepsister @waltdisneyworld @disney

You may be swapping bacteria when you kiss but that can actually be a good thing, research shows that this can be the key to boosting immunity and fighting disease.

5. You spend 2 weeks of your life kissing

Scientists have discovered that the average person spends about 20,160 minutes kissing over the course of their life. That translates into roughly two weeks of kissing.

Our bodies are biologically hardwired to recognize compatibility and many studies say that the key to recognizing that is in the chemistry of a person's saliva. In other words, by swapping saliva with someone else, you can discover if you are compatible with your partner.

If your significant other is still working on their kissing skills, don't worry! Our LipSense and anti-aging cosmetics are waterproof ? and smudge proof! #keepthatpout #senegence #smudgeproof #lipsense #kissme #kissyface #sloppykisses #puppylove

7. Kissing is good for your teeth

Kissing won't prevent you from needing to brush and floss, but studies show that due to the increased saliva flow, kissing can aid in preventing tooth decay.

8. Kissing makes you lose sleep and your appetite

Kissing increases the neurotransmitter, dopamine, which makes it hard for you to sleep and quells your appetite.

You burn about 2-5 calories for every minute kissing. While you still might need to do a few jumping jacks, a make-out session definitely beats spending time at the gym.

One study discovered that couples who engage in more kissing are more satisfied in their relationships than those who kiss less. So, if you want to up your relationship satisfaction, up your smooching.

11. The longest kiss was over two days

The record for the longest kiss is held by Ekkachai Tiranarat and Laksana Tiranarat of Thailand who competed in an event to hold the title of longest kiss. Their kiss lasted over 58 hours, 35 minutes and 58 seconds.

12. Lips have over a million nerve endings

Did you realize that kissing feels so good because lips are so sensitive? With over a million nerve endings, your lips are one of the most sensitive parts of your body.

13. Kissing causes your eyes to close

Not only would it be creepy and uncomfortable to have your eyes open while you're kissing, but due to a hormonal reaction, eyes dilate when kissing, which causes you to close your eyes.

14. Two thirds of people tilt their head to the right

If you're at a loss of which way to go, never fear, most people instinctively tilt their heads to the right when going in for a kiss. 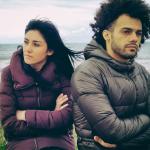