15 struggles only women can relate to

Men, Step Aside. Only Women Will Know These Struggles.

Anyone can tell you life is rough. But why does it seem especially rough for women? Before you protest, think about the average struggles men and women face. Having struggles doesn't mean a woman is less capable or she is unequal-having struggles makes her stronger. Some of these problems may seem small or unimportant, but they're things only women can really understand.

Call them petty problems, but they are problems to be solved. Here are just a few of the things women deal with almost daily:

1. Our hair can never be managed

2. And bobby pins disappear faster than the chocolate you give us

3. Ponytail holders (or hair bands) are dangerous when they snap

you know it's her last one when she reties a broken ponytail holder? pic.twitter.com/z8rygynuUE

4. A size 6 in one store is way different in another store

Women's pants will be too tight in one spot and too big in another spot and there is literally no scenario in which they just fit.

6. A woman's hair color may not seem like a big deal, but it can change the way she looks dramatically:

Should I dye my hair darker or lighter? ? #WomenProbs

7. Men want women who don't wear makeup, but we like it anyway

And this is why girls wear makeup guys. pic.twitter.com/RICeEVSLSd

8. Makeup can be a struggle in and of itself

9. We have to act happy when another woman wears the same shirt, but inside we feel a bit weird:

When a girl walking into a party with the same shirt on but you're ok with it cause it's your sister ? #twinning pic.twitter.com/oyRt1eTDxi

10. Our hormones take over a lot, but when we're really upset about something, people will still just blame it on hormones:

11. Men won't ever know the struggle of trying to paint nails

Having newly painted nails is a struggle like FOR REAL

12. At any event or game, the line for the bathroom is ALWAYS long

Line for the Women's Bathroom. There's not an event going on or anything, it's just the weekend. pic.twitter.com/n6fA4JAxkA

Do men not think it's obvious when you see their eyes avert from YOUR eyes to YOUR chest? ? #Womenprobs

14. And women have to put up with the worst women jokes ever

15. Some women are strong and don't always need a man's help, but some do

I am a strong independent women who don't need no man. Until I need to open a jar.

Some of these may not apply to you, but many women can agree that being a woman is difficult. There are strong, beautiful women who are only judged on their looks or attitudes. Many women face even deeper struggles like poverty, miscarriages, inequality and disease. The deeper struggles are very real, and women fight through them every day.

So give your love to the women in your life who face both the big and the small struggles. They deserve it.

Jenna Koford is on the content team at FamilyShare. She graduated with a degree in Communications—Journalism and a minor in editing. Jenna enjoys painting and calligraphy, planning a wedding, and Pinterest and Netflix.
nextarticle 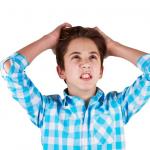 3 Reasons Grounding Your Kids is Destroying Their…