21 signs that he is absolutely perfect for you

Is He the Man For You? Take a Look at These 21 Signs That He Just Might Be.

It seems like every woman asks at least once, "How do you know if he's the one?" It can seem impossibly daunting to nail down whether a guy is the man you should marry.

Charles Murray, writer for the Wall Street Journal, said, "A good working definition of 'soul mate' is 'your closest friend, to whom you are also sexually attracted.'" Here's a list of ways you can recognize if you have found that person who is absolutely perfect for you.

1. He lets you wipe your nose on his sleeve

It's obvious that a man is perfect for you if he's the kind of guy who doesn't quarantine you if you've got the flu. Instead, he sits on the couch watching "Gilmore Girls" reruns with you and tells you you're pretty even though your makeup-less face is red and puffy. He's especially perfect for you if he holds you even if you smell vaguely (or strongly) of vomit.

2. You never run out of things to talk about

You don't know how your conversation migrated to which Pokémon is the best because you started talking so long ago. Even though you've known him for a long time, you somehow still have way too much to talk about.

3. But you're OK with silence

Sure, it would be great if he cleaned up the crumbs after he made a sandwich and you don't love the fact that he thinks it's socially acceptable to call people early in the morning, but you're fine with those things. You choose to ignore them because he's worth it and you don't want to change him because his quirks make him who he is.

He doesn't have to be chiseled out of marble for you to be attracted to him. You know he's perfect for you if you think he's a looker.

6. He makes you feel beautiful

Again, you don't have to be some sort of goddess, but he makes you feel like you're beautiful every day anyways.

I was told you need to give a guy four seasons and a road trip to know if he's a good match for you, and that makes sense to me. If you two can spend all that time together with greasy food and almost running out of gas and you still like each other when you get home, it's easy to see that you're perfect for each other.

8. He feels your pain

Sometimes your heart breaks when you don't get the job you wanted or you can't think because your sunburn is too intense. If your man is the kind of guy who also feels hurt when those things happen to you, that's definitely a sign that he's perfect for you.

Sometimes people are looking for someone who shares all their beliefs, but if you married that person, you'd be marrying yourself. It's good to disagree because your differences make your relationship valuable.

However, it's not a good sign if those differences cause you to get into nasty arguments. The guy that is perfect for you expresses his opinions in a way that doesn't necessarily agree with yours, but does respect them.

11. He makes mopping the floor fun

You're cleaning the kitchen and belting Disney tunes at the top of your lungs having just about as much fun doing chores as doing anything else. If he's the kind of guy you can be happy doing mundane tasks with, he's absolutely perfect for you.

True love is never having to say your sorry? Yeah, right. Love issaying you're sorry, over and over again.

Just because he made a mistake or hurt you, it doesn't mean he's not perfect for you. But he needs to be willing to admit that he was wrong and sincerely make efforts to fix what he broke. (And don't forget, the same goes for you, too.)

His arms around you make you feel happy on the outside and the inside. You feel safe in his arms.

14. Your single friends ask, "Does he have a brother?"

If your girl friends regularly stalk his family tree to see if he has a second cousin once removed they could pursue, that doesn't mean your man is perfect for them, it just means your man is a catch. Since your friends are probably similar to you, the fact that they are fans of your man is a good sign.

15. He knows your favorite drinks and snacks

Even if he thinks they are cheese-powdered fingers of terribleness, he picks up some Cheetos at the store for you because he knows you love 'em. Or he surprises you with a smoothie or snack when you're cranky.

When you both need to go halfway, he doesn't make you sacrifice the full half. He's willing to give up some of what he wants so that you don't have to give up everything that you want.

17. You have to text him right now

Is your guy who you need to message when you see a cat that looks like Robert De Niro or when you try a really awesome ice cream flavor? If you need to text him all of the things, he's got to be perfect for you.

18. He talks about the future

If he makes plans for things that fill your heart with joy, that's a good sign. He's confident about you and wants to take all the right risks for love. It's normal to have some fears about the future, but in general you should be optimistic about your future together.

If he takes your hand when you're watching a movie or at a party, he's the kind of guy who should be in your life long-term.

A guy who sweeps you off your feet is going to wear you out eventually. You shouldn't be obsessed with him the same way your 16-year-old self was with her high school crush. Your relationship needs to be less rom-com, more reality.

Even though you love people, you're not great at starting conversations. On the other hand, your man is a rock star at meeting new people but not so good at developing friendships the way you are. If your weaknesses are his strengths and vice versa, you've gotta be perfect for each other. 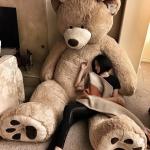