Ever Wonder Why Your Husband is Against Pda? Don't Worry. It's Not What You Think.

Not all men are comfortable with public displays of affection (PDA). While some have no issues holding hands or hugging their wives in front of others, there are those who feel awkward with too much PDA. It took my husband some time to demonstrate his affection in public - hugs, holding hands or even just a peck on the lips. He's not a shy guy. He's just reserved.

When you and your husband are in public and he limits his affection to holding hands or gentle hugs, chances are he is being respectful. Many couples take public displays of affection a little too far, making family, friends or even strangers feel uncomfortable. On the other hand, if your husband shuns any form of public affection, you begin to wonder what is wrong, and you question yourself. "Does he not love me? Is he embarrassed of me? Does he have someone else?"

It's natural to worry, but it's best to take a deep breath and figure out the real reasons for that lack of affection. Here are some possibilities.

Your husband wants to show you affection, but he is too shy. The idea of sharing emotional feelings in public embarrasses him - especially if he is a private person. Some guys just prefer to keep certain displays of affection between them and their wives.

Perhaps your husband grew up in an environment in which he felt unloved or unwanted. As a young child, he received little to no hugs or kisses before leaving for school or before bedtime. Perhaps he didn't see much love between his parents. Due to a lack of love and affection in his childhood, he may have internalized that pattern. As an adult, it will be hard for him to give affection.

Your husband loves you. He doesn't mind showing you how much he loves you; however, he doesn't see the need to show affection in public. That's just how he is. I can recall a couple of men in my family - from an older generation - who were very private with their wives. Though they were given love as children, they felt the need to keep their emotional sides away from the public eye. It was just how they were. Believe it or not, there are men today who firmly believe that displays of affection should be intimate moments shared between two people - not for the world to see.

Once you figure out the reasons why your husband is reluctant to display public affection, encourage him to join you in expressing your love. Lead by example. Take the first step in showing public affection. Gently grab his hand while going for a walk together, standing in line at the movies or at a party. When he least expects it, whisper into his ear that you love him, and wrap your arm around his waist. Demonstrating small gestures of love each day can help put your husband at ease. 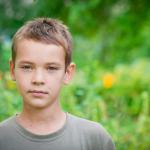