As hopeless as it may sound, cheating is fairly common. According to a 2015 poll by YouGov and The Economist, one in five Americans admit to having been unfaithful within the context of a committed relationship. When you think of an affair, the first thing that comes to your mind is probably sexual intimacy with another person that’s outside of the marriage. And, for many, the act of sex is the epitome of infidelity because these encounters are highly emotionally charged.

• Your job requires spending a lot of time with a co-worker or colleague. Working on a project may keep you in the office for hours and days. Seeking the attention of your colleague can create emotions to stir.

• A spouse is left alone and meets someone at a social function, the gym, or at school when they pick up the kids.

• Maybe your marriage is in a rocky patch, you lean on someone else and vent about the frustrations you are having with your spouse. Sometimes the new attention can create feelings to emerge.

Either way, an emotional affair has the same power as a sexual affair. Neither one is less problematic. However, if you feel the need to hide your actions, thoughts, and emotions there is probably something wrong with the way you’re handling your actions.

There are several behaviors and emotions that serve as indicators that you’re having an emotional affair. You may be unaware of these actions and feelings; however, being proactive and stopping these scenarios in their tracks is the best choice for everyone involved.

Your intuition is suggesting that your behavior is inappropriate.

You know that little voice, right? The one that tells you when you should or shouldn’t be doing something. That voice acts as your moral compass. Odds are, you don’t always initially agree with that voice; however, your intuition is usually right.

If your intuition is waving red flags and has your gut feeling uneasy, listen to it! Stop communicating with the other person and end it. If it’s with a co-worker, apologize for any misunderstandings and do not put yourself in a situation where you are lone with that individual. If your emotional affair is with someone you met at school, or another communal location stop allowing yourself to engage in questionable conversation. Refrain from being alone with that person and make sure your interactions are in a group setting. If you’re going to the gym, adjust your schedule and go at a different time. There are many actions you can take to eliminate any more questionable behaviors from occurring. It’s important to be on the same page, with the other individual, so your new recourse is understood and respected.

You are preoccupied and daydream about your friend more and more.

If your thoughts are consumed by another person, that’s not your spouse, there is a serious concern. Ask yourself, would you be bothered if your spouse was thinking about someone else? Odds are, you would.

It’s impossible to automatically stop your mind from wandering; nonetheless, you can take action to combat the inappropriate daydreaming. Some ways you can make an effort to change your mind’s direction are: take the time to plan a date night with your spouse, have a conversation with your spouse and discuss the things you can do to improve your relationship, and/or take action and dedicate time in the day to each other (create a no phone policy during certain hours and spend time together). Invest your time in your marriage.

You share your thoughts, feelings, and problems with your friend instead of your spouse.

You’re married and your spouse should be the person you share your thoughts, feelings, and problems with. Now that doesn’t mean they are the only person you talk to; however, if you’re not sharing those feelings with your spouse and are sharing them with someone else, then there is a serious problem. Assess your conversations and be honest with yourself, are you sharing intimate details with another person? Ask yourself, would you be upset if you learned that your spouse was communicating with another person in this manner?

First things first, stop engaging in conversations with the other person. Second, sit your spouse down and talk. There is a reason why you’re not talking to your spouse and sharing your intimate feelings and thoughts. Be honest and open and find a solution together. Dedicate time to just talk and do not allow other people and/or phones to become a distraction. Communication is the foundation for all healthy relationships.

Marriage is not easy – it takes a lot of effort and perseverance. It’s important to remember your needs along with your spouse’s, but understand that your partner cannot read your mind. It’s imperative that you the time to voice your concerns and feelings; otherwise, if you don’t, your spouse will never understand why you’re feeling a certain way. 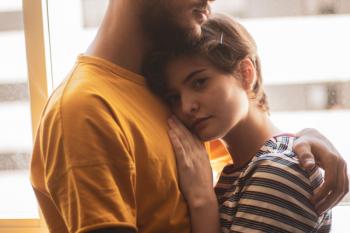 7 Signs Your Spouse Has a Mood Disorder