3 Things to Avoid When Your Spouse Ignores You

Most Couples Enter a Marriage Feeling Close and Connected to Their Spouse.

Most couples enter a marriage feeling close and connected to their spouse. But sometimes patterns of unhealthy communication can drive a wedge between partners and turn what was once an intimate and supportive relationship into one of loneliness, disinterest or even contempt. Most people would like to rediscover the happiness and intimacy that they experienced in the early days of their marriage but don't know how to break the patterns of behavior that have caused the problem.

In many cases, spouses begin to ignore each other because they are trying to escape from conflict. Often it is the wife who tries to maintain the relationship, and so it is the wife who complains when things aren't going well. Because men generally don't deal with emotions as openly as women, they will respond by trying to solve the problem rationally or by simply withdrawing. If a simple discussion more often than not turns into a war of insults, your spouse may learn to cope with that situation by retreating into himself and tuning out the negative communication.

No one is to blame in this scenario. It is simply a matter of different communication styles. When a woman complains, it is her way of broaching the subject and trying to solve the problem. When approached in this manner, however, a husband might feel criticized and respond with criticism of his own or retreat from the relationship. When this becomes a habitual pattern, it can have a devastating impact on a marriage.

The following are some ways to avoid the negative communication patterns that can drive you apart.

1. Don't accuse, give commands or berate your spouse

This will only cause anger and resentment and will deepen the divide between you. Avoid saying things like, "You never listen" or "You don't care about me." These types of statements will cause further argument or withdrawal on the part of your spouse. Instead, tell your spouse how you are feeling and express your desire to be closer. This approach will produce better results by far.

2. Don't interrupt or raise your voice

When discussing these types of personal issues, it is easy to become emotional. This can lead to raised voices and interruption. Because these behaviors are often unconscious, try to be as self-aware as possible. Try to remain calm and let your partner finish his or her thought before you respond.

3. Don't fall into the cycle of attack and counter-attack

Often these types of discussion start out with positive intentions, but because of miscommunication they can deteriorate quickly. It starts when one partner misinterprets what the other has said and then descends into a pattern of traded accusations and subtle insults. Make every effort to consider your spouse's comments in the best possible light and always avoid the destructive pattern of escalating negativity. Instead, listen to what your partner says and then repeat it back in your own words to make sure you have understood his or her meaning.

For example, you could say, "So what I'm hearing you say is that you feel that I am not doing my fair share around the house." Then give your partner a chance to either confirm or clarify your statement. This exercise will help to prevent misunderstandings which will in turn decrease the chances of the discussion turning into a heated battle. 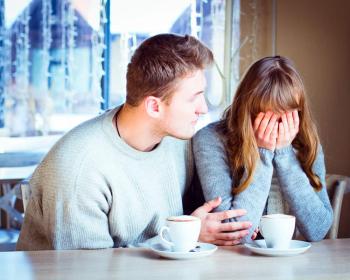