4 signs that your marriage is in trouble

Is an Issue Brewing That Needs to Be Addressed in Your Relationship?

I've driven old cars since I turned sixteen, so I've always paid close attention to the Warning Lights on the dashboard, because I've learned the hard way that ignoring the warning could mean being stranded in a broken car on the side of the road. The Warning Light isn't a sign to panic; it's just a reminder that an adjustment needs to be made under the hood or else eventually, the problem could become an emergency.

I've met with so many couples over the years who have ignored the "Warning Lights" that their marriage was in trouble and didn't acknowledge the issues until those issues had evolved into a full-blown emergency or even a divorce. A key to strengthening (or even saving) a marriage is to address issues early and aggressively.

There are many indicators that can signify a issue is brewing that needs to be addressed in your relationship. If any of these "Warning Lights" pop up in your marriage, take quick action to resolve them and you'll be saving yourself and your spouse a lot of unnecessary heartache down the road.

All couples go through "seasons" of busyness or exhaustion (usually with small kids) where their Sex Life takes a backseat, but sex needs to be a consistent priority to keep the intimacy alive in a marriage. Without it, everything else will usually unravel. If you find yourself making excuses why you don't do it very often, that's a warning light.

Do you remember when you were dating and you laughed all the time? Wasn't that fun? Why did you stop? Granted, life can get stressful with bills and kids and everything else, but even in the most stressful times of life, a husband and wife should share a lot laughter and joy. If you aren't laughing nearly as much as you used to, that's a warning light.

In marriage, secrets are as dangerous as lies, because a marriage must be built on a foundation of mutual trust and honesty. If you are hiding money, conversations or anything else from your spouse, that's a warning light.

There are definitely many more than these four, but I'm convinced that these are among the most common. If you're experiencing these or others, let me encourage you not to give up. If you're taking the time to read this, it means that you care about your marriage and you're being proactive about strengthening it. 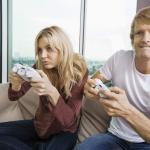