Do You Know Who You'd Rather Spend 24 Hours Stuck in an Elevator With? Find Out What "The Elevator Rule" and Other Curious Questions Mean About Your Relationship Needs.

Who would you rather be stuck with in an elevator for 24 hours? Or spend a 12 hour layover with? Who would you bring to a desert island? These are more than just surface questions. And the answers speak more about your interpersonal needs than you might imagine.

There's more to these silly sayings than meets the eye. It's also about what's in your heart and in your head. So let's find out what your picks say about what you're looking for in a mate.

"Who would I rather be stuck in an elevator with for 24 hours?"

Let's say there's no MacGyvering your way out of this mess, you're stuck until emergency crews can rescue you. But you know you will be rescued, so there's no life or death panicking. In this scenario, you don't necessarily need a resourceful or handy man. But you do need someone who is patient, calm, relaxed and at least somewhat entertaining. You need a fun comforter — someone who keeps your spirits up, makes the best of a bad situation and can take your mind off things. He doesn't panic in times of stress and helps cleanse the energy when things get thick.

"Who would I rather spend a 12 hour layover with?"

A 12 hour layover is reality of modern travel and not unheard of. So this scene may be a bit more realistic and is ,therefore, a necessary consideration. Here your best bet is probably a practical adventurer. He sees the inconvenience as a window of opportunity to explore a city or community, with precautions. He plans ahead and knows the schedule, so you return on time and catch your next flight. He might map out a route to visit a nearby museum, catch a movie, eat at the best rated local restaurant, then take a walk in the park. He could arrange for Ubers or Lyfts around the city, or check into a motel or Couch Surfing crib to keep your carry-ons and take a nap. He's a thinker and a doer — a great combination.

"Who would have a better time with my friends?"

If you go for the guy who would blend right in with your gal pals, you're looking to be with a social romantic. He's the guy that makes sure everyone feels cared for and comfortable, whether he personally "loves" them like you do or not. He knows your girlfriends are important to you, so they're important to him. He's really courting all of you! But that doesn't mean you won't get special attention when it's just the two of you. He steps up his game even more when things get intimate.

"Who would I rather be stranded with on a desert island?"

The island test is probably the most difficult, because it is the least likely and the most challenging. Here you need someone who is man enough to brave the elements and push through pain, smart and skilled enough to ensure both of your survival and pleasant enough to make island life worth living. Here you'd need a sensitive survivalist. He is soft and strong: Soft enough to actually be a partner, even way out in the middle of nowhere where a lesser man could take advantage of your inability to escape his abuses, and strong enough to create both a sense of security and physical means of safety.

These questions are often asked outside of the relationship realm and actually come into play during the interview and hiring process. When big bucks are on the line and managers need people of a specific type on their team, surprisingly, they decide between multiple qualified candidates by asking, "Who would I rather?" So whether it's an intimate or employee/employer relationship, these concrete qualifications might make or break the deal. 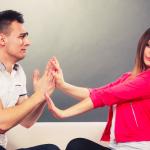 12 Vile Behaviors That Devastate Your Husband